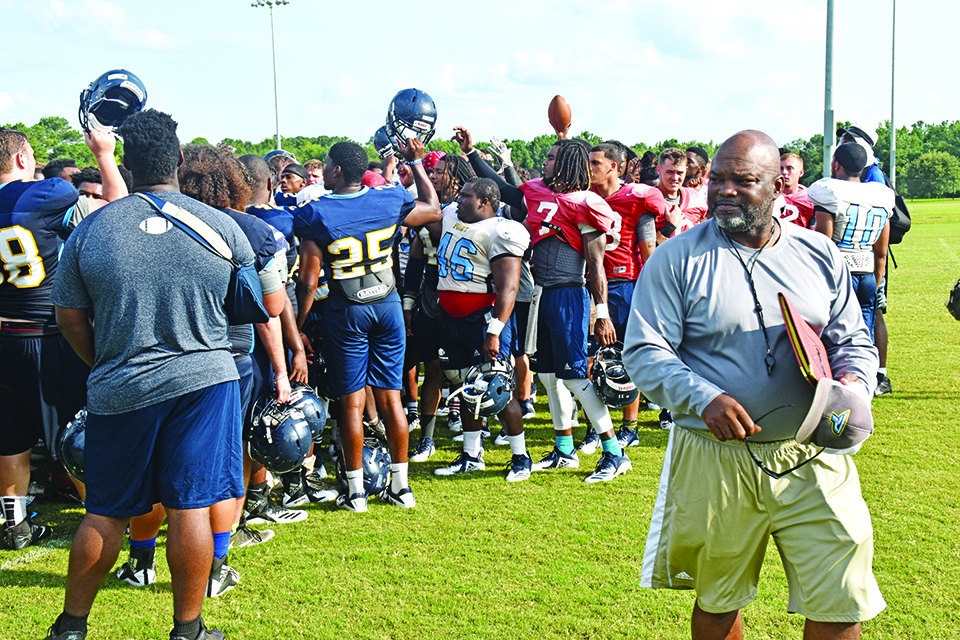 VALLEY — The Skyhawks of Point University are prepared to play their season opener at Ave Maria University this Saturday at 11 a.m. EDT.

“So far, it’s been a process,” Skyhawks head football coach Julius Dixon said. “Some days we look like we know what’s going on and some days it makes me wonder if football is the game for them but that’s to be expected. The consistency is what we’re searching for as coaches to make sure more times than not we’re doing exactly what we’ve coached them to do. I’m pretty pleased thus far.”

Veteran leadership has been the strong point that has impressed Dixon the most this summer, he said.  Senior leadership is what is going to lead to winning more ball games for the program. If the older players acted as assistant coaches who emphasized to the younger players the importance of putting equipment back and getting to practice on time, then the discipline in the program will improve.

Under center, senior Derek Bellard returns as the team’s starting quarterback, who was named as a second-team all-conference player last season. In 2017, Bellard threw for 21 touchdowns and 16 interceptions with a passing percentage of 49.4 percent.

In the backfield, sophomore running backs Quay Hartfield, freshman John Eilum, sophomore Kolby Williams and sophomore Keith Adams were all standouts that Dixon said he had to pick from.

“We’re looking forward to them getting back and seeing what our defense can do,” Dixon said.

Mental focus is one component that the team needs to improve to be ready for Saturday’s matchup.

“At any moment, these kids’ attention span will come and go and it’s frustrating as a coach because a lot of them think that they can just get to the game, flip the switch and they’re ready to go,” Dixon said, “but if you don’t practice that, it’s not going to happen. We’re just constantly trying to remind them to stay focused. To stay mentally sharp.”

The focus was a point of emphasis for Dixon during fall camp this year, he said.

“It’s no fun to come out here for two weeks to do nothing else but prepare for a game,” Dixon said. “Now it’s game week. This is when the fun comes because, after all of the preparation you’re supposed to do, the fun is Saturday.”

The Skyhawks open up the home schedule on Sept. 8 against Edward Waters College at 1:30 p.m. EDT in Rams Stadium.

“Valley should come out because we’re a part of the community,” Dixon said. “We’re an extension of what they represent here and since I’ve been here, I’ve been pleased. I just haven’t gotten around and visit folks like I need to but we have a product here and one that people are going to be proud of. We’ve put a lot of work into molding these guys and making sure that they’re doing the right thing, saying the right things and we will continue to do that.”