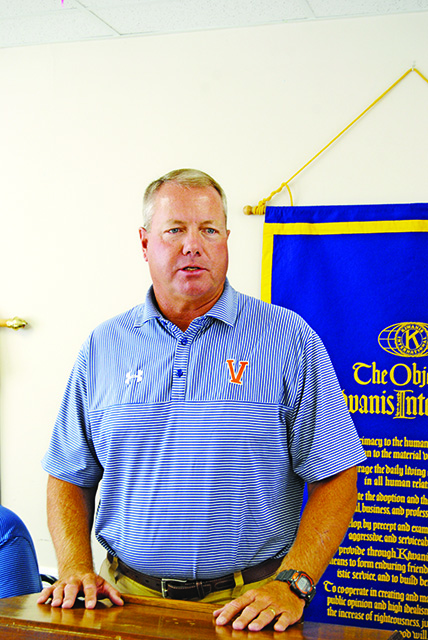 RAM BOSS SPEAKS — Valley High head football coach Buster Daniel said Wednesday that he believes his team will be much improved this year. Daniel, the guest speaker at Wednesday’s noon hour meeting of the Kiwanis Club of Valley, is entering his second year as the Rams’ head coach. Photo by Wayne Clark

VALLEY — Valley head football coach Buster Daniel spoke at the Kiwanis Club of Valley on Wednesday afternoon in the fellowship hall at the Langdale Methodist Church.

He opened up by thanking the club for inviting him back to speak this year. Daniel is entering his second season at the helm for the Rams after spending a few years on the coaching staff at Opelika High School. Daniel, a Valley alum himself, briefly spoke on his experience coming back to his hometown and seeing people who he grew up with.

Then, he quickly transitioned into talking about this year’s football team.

“I like to tell people that we don’t have any bad kids,” Daniel said. “They deserve to win.”

The goal coming into last season for Daniel was to change the culture at Valley. He was coming from a winning program at Opelika and wanted similar results in his first season at his alma mater. The team ultimately went 2-8 in 2017, but the Rams gave up late-game leads in three of those losses.

“I don’t mind getting beat, but I don’t like giving up ballgames,” he said.

The question of who the starting quarterback was going to be this season came up again in the question-and-answer portion of the coach’s talk. As of right now, junior quarterback Eli Culpepper has the edge over sophomore Gabe Harmon due to Culpepper’s ability to lead a unit, Daniel said. A final decision on the starter will be made next Wednesday or Thursday, but both quarterbacks will see playing time this season, Daniel said.

This season, the Rams moved to Region 2 from Region 4 in Class 5A. Beauregard, Carroll, Charles Henderson, Greenville, Rehobeth and Tallassee are in that region this season.

Valley lost only six seniors from last year’s team, so the nucleus of the team is back. There are currently 51 kids on varsity and 50 players on the freshmen team.

Daniel said he spoke to Valley Sportsplex director Mark Hudmon about giving the rec football teams blue and orange jerseys. The two also agreed to let the 11 and 12-year-old teams begin running the same offense and defense that Daniel runs at the high school.

“The future here is really good,” he said.

As a part of growing the future of the program, former Springwood School head coach Thomas Hill was named the head coach for Valley’s freshman football team this summer.

“Thomas is a wonderful guy,” Daniel said. “I knew who he was but I got to know him more when we started talking about hiring him. He’s a great coach, he’s an even better teacher.”

Hill is teaching history at Valley and received rave reviews from the club once Daniel mentioned his teaching.

“Valley High gained something when they hired him,” he said.

Daniel closed by encouraging the public to support high school football and come to watch the games this year. The Rams open the season at Lanett on Aug. 24.