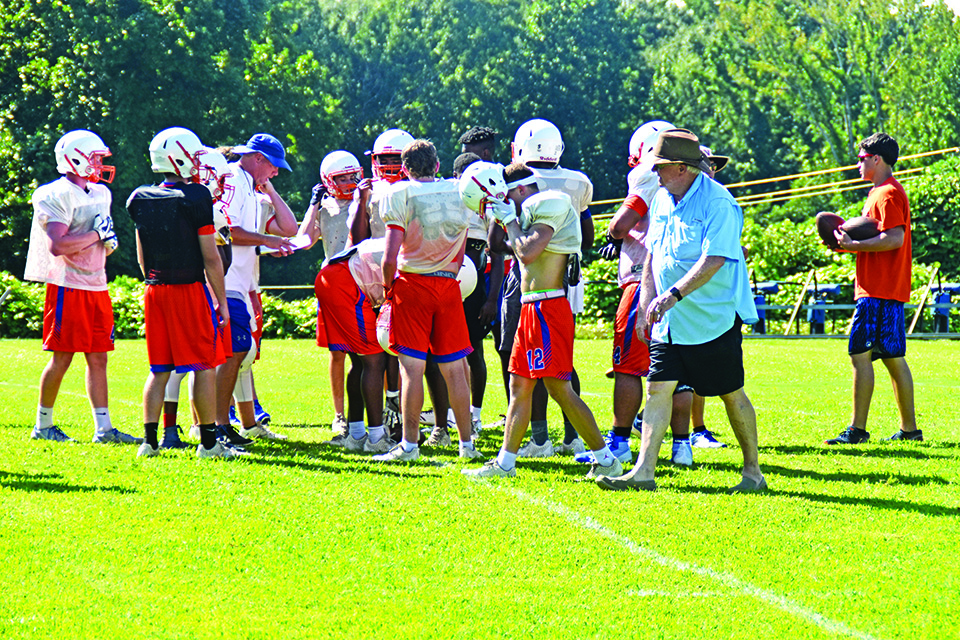 HUDDLE UP: Valley head football coach Buster Daniel gathers his team around during a practice on Wednesday. Photo by Rashad Milligan

VALLEY — It was time to get back to work.

The Rams of Valley High School on all levels occupied the practice fields behind the school on Wednesday afternoon in 90-degree heat. The atmosphere for the fall practice was much different than the workouts in the summer were.

In the months of June and July, Valley arrived at the practice field early in the morning and ran on the dewy grass with various team shirts, helmets, basketball shorts and cleats on. The Rams simulated plays but could only go so far due to the Alabama High School Athletic Association (AHSAA) regulations.

The team participated in various 7-on-7 competitions in July. In the 7-on-7 format, teams don’t wear pads, only helmets and there is minimal contact involved.

“I’m not a 7-on-7 guy,” Valley head coach Buster Daniel said after the Opelika 7-on-7 joint practice. “I’m a football coach.”

Senior athlete D.J. Dunn and freshman B.J. Baker split snaps at running back early on in the practice. Senior receivers Jaiven Tucker and Steven Coker were still getting used to the “XYZ” wideout system on offensive formations that the second-year coach Daniel has implemented.

It’s still unclear who the starting quarterback of the team is. Sophomore Gabe Harmon and junior Eli Culpepper remain in a battle for the title. Regardless of who wins the starting job, Daniel has said he wants the Rams to improve their passing game.

“We’ve got to improve on our passing game,” Daniel previously said. “We’ve got to be able to throw the ball to set up the run.”

During this year’s media days, Daniel said Culpepper has been a better leader while Harmon has been the better athlete but doesn’t communicate as well as Culpepper.

“They both may play,” Daniel said of the athletes. “They’re both earning spots right now.”

Valley opens the season against the 2017 2A state champion Lanett. The schedule doesn’t ease up as the Rams host Beauregard on week three, a team that went 10-2 and made the third round of the playoffs last season. Valley closes the regular season with another 2017 playoff in Benjamin Russell.