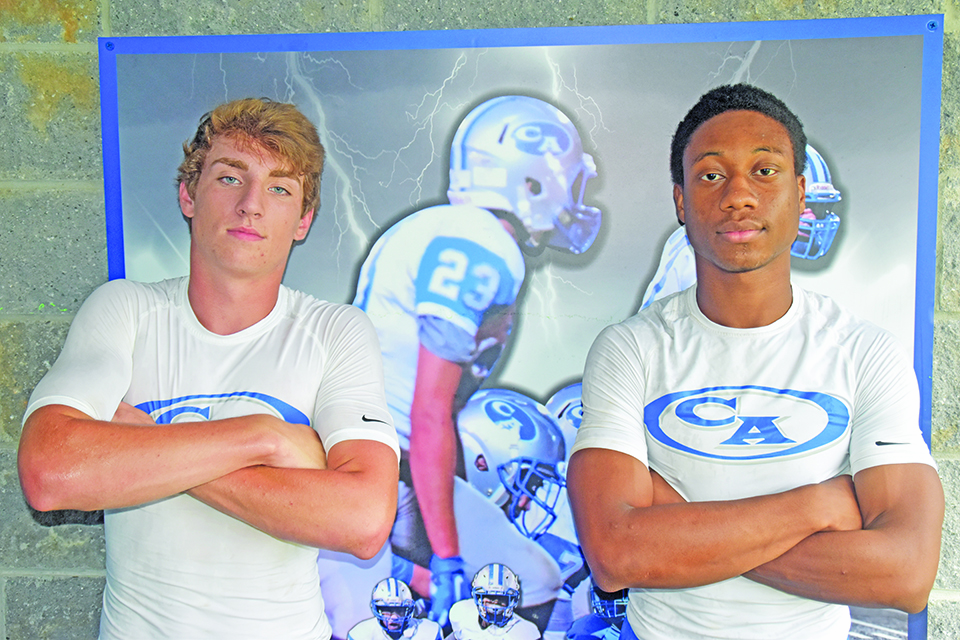 DOUBLE TEAM: Chambers Academy athletes Braxton Allen and C.J. Lyons look to lead the Rebels to a state title this year. The team was ranked No. 8 in the AISA state rankings. Photo by Rashad Milligan

LaFAYETTE — A new season means a new ranking for the Rebels of Chambers Academy.

The team that has lost a combined two games in the 2016 and 2017 seasons are the preseason No. 8 team in the Alabama Independent Schools Association (AISA), according to the Alabama Sports Writers Association. However, Chambers County head football coach Jason Allen remained unmoved by the news.

“Preseason polls don’t mean very much to me at all,” Allen said. “It’s pretty much based on what you did last year and a preconceived notion. I don’t buy a whole lot into that, because every year is a different year. Every team is a different team and you’ve got to go out there and prove it.”

Allen later said that he was honored to be ranked multiple times in the preseason polls. As a private school, the Rebels were allowed to begin fall practice a few days earlier than the public schools in the Alabama High School Athletic Association (AHSAA). Even with the early start, Allen still sees much room for improvement from this season’s team so far.

“We’ve got to get the little things done right,” Allen said. “We’ve got to recapture the timing of our offense, physicality. All of those things don’t just happen because you did it the year before, it takes a lot of work.”

Another one of Chambers’ goals for the year is to run a more balanced offense. The Rebels have traditionally run the run-heavy Wing-T formation, an offense that has allowed senior running back C.J. Lyons to rack up two 1,000-yard seasons. Sophomore quarterback Payton Allen holds the responsibility for leading the Rebels’ passing attack.

Approximately 20 minutes north in Lanett, Chambers’ rival, Springwood School, recently hired John Gartman to be the new head football coach. Gartman said that he planned to implement the Wing-T offense for the Wildcats as well.

“I know Coach Gartman, he and I have talked several times over the years,” Coach Allen said. “He definitely will bring some good football to them and obviously I think a lot of the Wing-T, because I run it. I think it’s going to bring even more excitement to the rivalry and he’s going to do a really good job with those guys.”

Defending AISA Class A state champions, Patrician Academy, is one spot ahead of Chambers at No. 7 in the comprehensive AISA poll. Autauga Academy is the No. 1 team in the poll. Success Unlimited received a vote in its first season of having a football program. The team from Montgomery faces Springwood on Aug. 17.

Chambers Academy opens its season on Aug. 17 as well at Lee Scott Academy in Auburn.