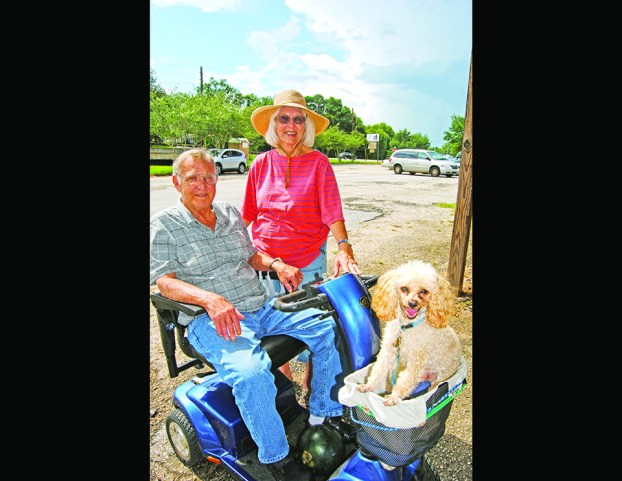 COCO CAN DO IT: A twelve-and-a-half-year-old poodle named Coco is a wonderful companion for Lamar and Lenora Fuller of Valley.

VALLEY — There’s a common misconception that service dogs are big canines such as German Shepherds, Labrador Retrievers or Golden Retrievers. While these breeds have been proven to do great work in helping people with disabilities, smaller dogs can be helpful as well.

Lenora and Lamar Fuller of Valley wouldn’t trade their poodle Coco for any dog, no matter how well trained.

“Coco taught himself and does a great job,” Lenora said, explaining that Lamar is a diabetic who must keep constant watch of an insulin pump. When it goes off it makes a high-pitch sound. Sometimes, the Fullers can’t hear it but Coco does.

The dog runs to Lamar and alerts him to the sound.

“He’s amazing,” said Lenora. “I can’t help but brag on him. He’s been such a good companion for us. He’s getting older. He’s twelve-and-a-half now.”

Lenora is a volunteer for Bradshaw-Chambers County Library.

She loves going to the library during the Christmas season and having Coco’s picture taken with Santa Claus.

They also like taking Coco to the Valley Farmers’ Market on Friday afternoons.

“I don’t know what we’d do without Coco,” Lenora said.

In addition to helping people with diabetes, service dogs can be of assistance to those with visual or hearing impairment, mental disorders such as post-traumatic stress disorder, those who have seizures or who have a mobility impairment.

They are characterized by good health and temperament, trainability and the capacity to bond with a family.

LANETT — Many already know Dave Shirley and his business, Dave Shirley Photography, as a staple of Lanett. He and... read more