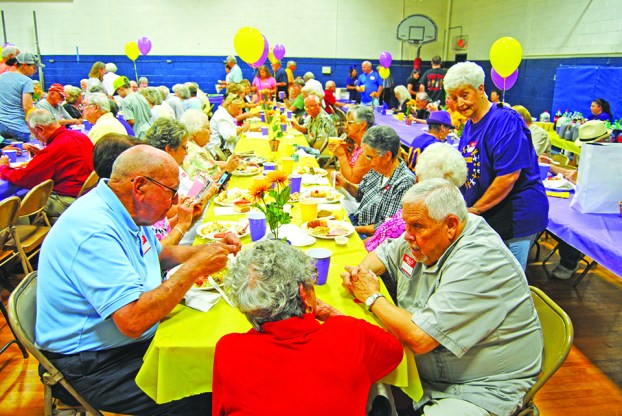 If it’s August, and there’s a big crowd of purple and gold-clad attendees, it’s got to be a reunion of former students who attended Shawmut School when they were young.

These reunions draw around 200 people every summer. Many of the attendees still live in the Valley area and some from as far away as Florida, Tennessee, Louisiana and Texas. It’s a matter of if one is born in Shawmut they are a child of the Circle and will always love being around what P.I. Johnson calls fellow “Shaw-MOO-shuns” to talk about the good old days.

There’s plenty of good food to go around, some really nice items that were up for bids, and some door prizes were given away. Old photos of ball teams and familiar scenes in the Shawmut community were popular attention getters and memories music from the 1950s and 1960s was played by emcee Charles Story.

This was the 20th annual Shawmut Reunion. A few of the attendees went to school in the two-story Shawmut High School building on Shawmut Circle, among them this year’s Reunion King, Charles Duffey, and Reunion Queen, Sara Jones. Once again, money was raised for a donation to Bob Harding-Shawmut School. Members of the Shawmut School Reunion Committee will be making a check presentation to the school in the near future.

After all these years, some of the Shawmut alumni remembered the words by heart and sang along. Sung to the tune of Cornell University’s “High Above Cayuga’s Waters,” the song’s chorus went: “We’ll be true to Shawmut School, Purple and Gold for-ev-er.”

Wildcats quickly prepare for next Friday’s season-opener at home