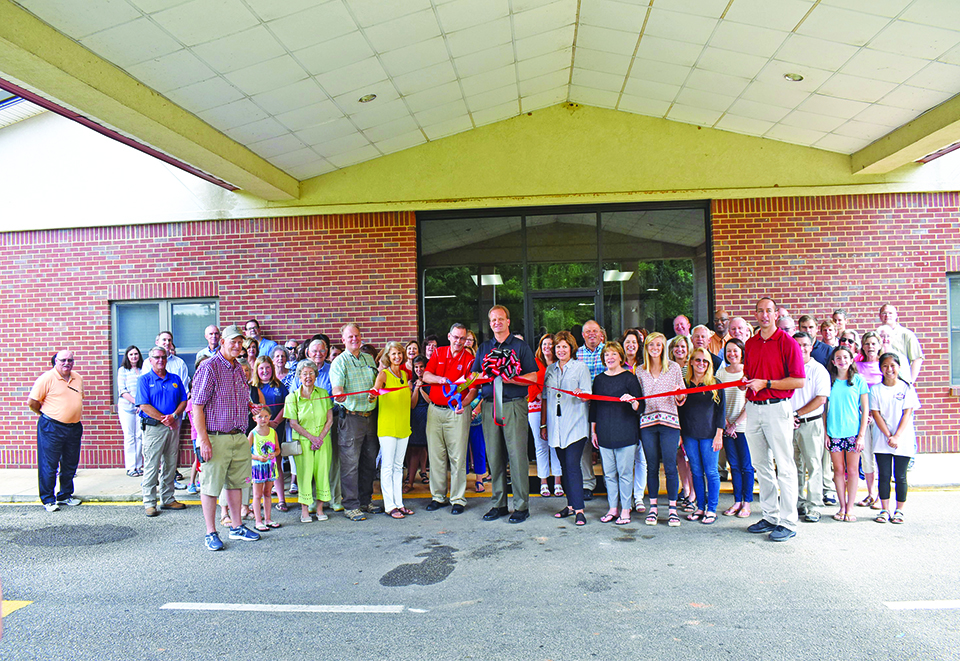 CUTTING THE RIBBON: Springwood Headmaster Rick Johnson cuts the ribbon on the new International House, a place for students that hail from other countries to come and live while attending classes.

LANETT — The front carport of the newly-renovated Springwood International House was full of people, not cars, on Friday morning as a crowd gathered to witness the ribbon being cut on the school’s new project.

The International House of Springwood is the next step in bringing in more students from around the world. Starting this Sunday, Aug. 5, students from five different countries will be flying in to move in to their new home away from home.

“Springwood has been in existence since 1970. About three years ago we started having conversations about our enrollment and what could be done to help grow our enrollment,” headmaster Rick Johnson said. “We discussed many, many ideas, but the one that really resonated was expanding our reach to have students from around the world come and be educated.”

The huge crowd there to see the ribbon cutting was made up of Greater Valley Area Chamber of Commerce members, Springwood faculty, West Point Mayor Steve Tramell and other interested and invested community members.

President of Springwood School Board of Education Tom Oswalt gave opening remarks before praying over the school.

“Springwood is like every other business,” he said. “Springwood has to adapt and has to change and has to take advantage of opportunity. We have seen a tremendous opportunity in the international market.”

He emphasized how international students who want to attend American universities have a better chance if they have graduated from a high school within the country.

Telling an anecdote about how his son explained what a “jump forward” was in a television show, he related that to the school.

“As you walk through the building, in your mind just ‘jump forward,’” Oswalt said. “Jump five years or 10 years and maybe you can see some students around some tables, studying or eating, maybe you see the recreation area where some students are playing ball and the place is just alive. From right here in Lanett, we can touch people all over the world.”

When the headmaster took over as speaker, he encouraged community involvement with the international students, including hosting them for weekends or inviting them to holiday events. Johnson is in his 7th year as headmaster and attributes a lot of the school’s growth and success to those from other countries.

“We like the diversity. They teach us as much as we teach them,” he said.

The International House, located at 1716 Cherry Drive in Lanett, is set up similar to college dorm rooms.

Lofted beds for the students are set up next to desks where they complete their schoolwork.

A recreational room, sporting a TV and ping-pong table, gives students a place to relax when they aren’t in class.

A path also leads from the house to the school for easy access.

According to Johnson, between 25 and 28 students will be involved with the international program this semester.