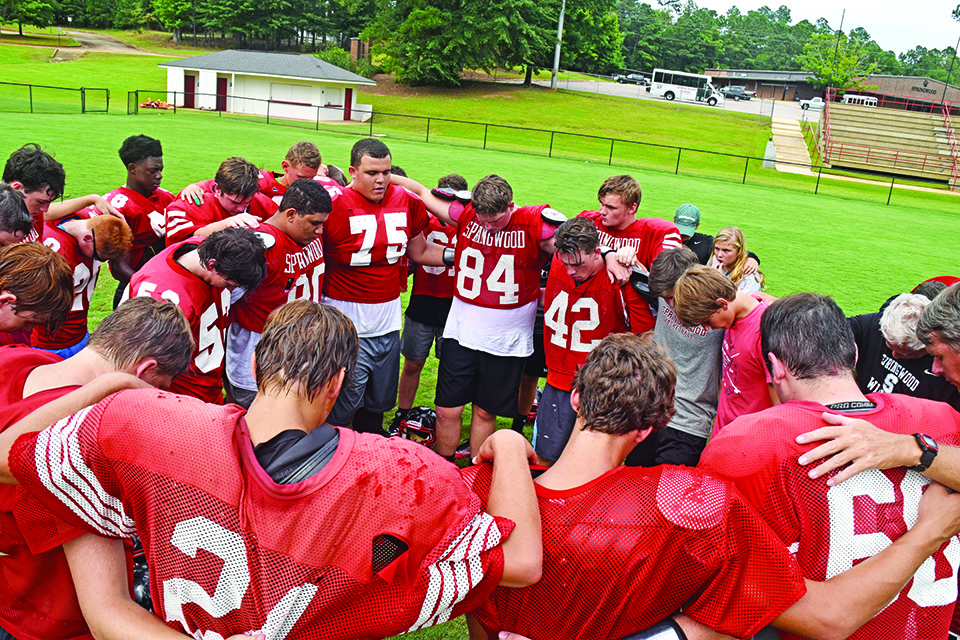 FINAL PREPARATIONS: Springwood School is prepared to play its first game tonight at home against Success Unlimited. Kick off for the game is at 8 p.m. EDT. Photo by Rashad Milligan

The two local schools in the Alabama Independent Schools Association (AISA) kick things off in a pair of matchups.

This is the first regular season football game that the Mustangs of Success Unlimited will play in school history. The school is housing great athletes right now, however, as the basketball team won the Alabama Christian Sports Conference’s state championship last year. The basketball team went 15-5 last season and were ranked in the top 100 teams in the state, according to MaxPreps.

For Springwood, this marks the first challenge for the team’s new head coach John Gartman. Gartman has been involved with the AISA his entire career, even in the 1990s as a quarterback at Jackson Academy and Wilcox Academy. He last served as the defensive coordinator at Escambia Academy, a team that went 48-15, won two state titles and achieved one runner-up finish during his five seasons at the school.

In addition to his aggressive defensive mindset, Gartman is bringing the Wing-T offense to the Wildcats this season. The team only had a month and a day from the day Gartman was hired to debut the Wing-T.

“It’s been kind of a slow progression putting it all together, but I think we’re getting to the point where we’re finally starting to understand everything and not just what we’re doing, but why we’re doing it,” Gartman previously said. “We’re getting a deeper understanding of our offense and that’s what we want.”

The Wildcats moved down from AISA Class AAA to Class AA after finishing with a 3-7 record last season. The last time Springwood was in Class AA, the team snuck into the 2015 playoffs with a 5-5 regular season record.

No. 8 Chambers Academy will travel to Lee-Scott Academy to face off against the Warriors at 7 p.m. CDT.

“Preseason polls don’t mean very much to me at all,” Chambers Academy head football coach Allen previously said. “It’s pretty much based on what you did last year and a preconceived notion. I don’t buy a whole lot into that, because every year is a different year. Every team is a different team and you’ve got to go out there and prove it.”

Lee-Scott is led by 6-foot-4-inch, 315-pound senior offensive linemen Chasen Earnhart. Last season, the Warriors went 6-5 in the regular season and lost in the first round of the playoffs to Monroe Academy.

This year, the Rebels are led by sophomore quarterback Payton Allen. Allen will be accompanied in the Wing-T backfield with a host of athletes, featuring seniors C.J. Lyons and Braxton Allen. Lyons ran for 1,000 yards in back-to-back seasons. Hayten Harris and Jordan Gillespie will also be in the backfield for Chambers.

Braxton Allen is the team’s leading tackler after racking up 130 tackles last season. Jason Allen said Braxton is the “best linebacker” that he’s ever coached. Senior offensive lineman Alston Knox is still a key player for Rebels. The team is returning most of its starters on defensive and Allen said he expects this unit to be the best defense he’s ever coached.

“We’re really excited,” Jason Allen said earlier this week. “Seems like it came upon us really fast but we had a scrimmage last Friday against Macon East Academy and that was really a good test for us to see where we stood and we’re excited about being to kick it off this Friday.”