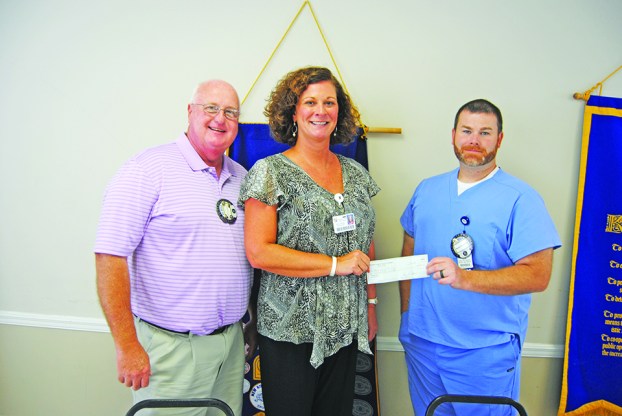 LaFAYETTE — With the 2017-18 school year starting for most local systems on Thursday of this week, Chambers County Superintendent Dr. Kelli Hodge has been making the civic club speaking circuit this week. On Monday, she was the guest speaker at the Valley Lions Club meeting and on Wednesday spoke to the Kiwanis Club of Valley.

On the positive side, Dr. Hodge said that the Chambers County School District would be operating under one of the best budgets it’s been given by the state in some time.

The local system will be operating with a $39 million spending plan. The final budget has yet to be adopted, but will have to be submitted to the State Department of Education by Sept. 15. Dr. Hodge, the central office and the board of education will be making some fine tuning before then.

Approximately $28 million, or some 71 percent of the total budget, will be going to salaries. That’s about normal. Chambers County will have 275 teachers and 192  support staff. The local system has been paying for more teacher units in recent years.

The system looks to be in good financial shape with a $4.9 million reserve. By state law, a local public school system must have a one month operating balance in reserve. For Chambers County, that’s around $3 million.

The school system has shown steady improvement in its graduation rate in recent years. It was just over 75 percent several years ago and is now at 84 percent.

“We’re making improvements, but we’re not where we want to be,” Dr. Hodge said.

Dr. Hodge is a native of Chambers County and a graduate of Valley High.

“I see great things going on that many people don’t see,” Dr. Hodge said. “There are so many negative comments out there. That’s why we started Hodge Podge.”

Hodge Podge is an online site where Dr. Hodge comments daily on good things that are going on in the school district.

“When we started it last year I didn’t think we’d have something every day of the year, but we did,” she said. “We’d like to do it again this year. We want everyone looking at Hodge Podge and making comments on it. We’re trying to change the culture to keep out the negative words.”

School officials will be taking on two difficult tasks this year. The school district will have monitoring and an accreditation review in the same year. It wasn’t planned that way but that’s the way the calendar fell.

“Being accredited is what makes your diploma more valuable,” Dr. Hodge said. “They will be watching teachers and students in the classroom.”

At Wednesday’s Kiwanis Club program, Dr. Hodge said that she was grateful for the outpouring of community support the school system has received.

“Businesses, individuals and churches have donated school supplies,” she said. “Some businesses fed the teachers in LaFayette, and some students were given free haircuts. We do want it known that we truly appreciate this support.”

Dr. Hodge said it’s an eye opening experience for teachers to go through a poverty simulation.

“If any of you have an opportunity to do this you should,” she said. “It will help you in your personal life and in your spiritual life.”

Those who live above the poverty line have no idea the problems those who live in poverty have to deal with every day. Those who take in the simulation are assigned a family that is living in poverty.

“It’s stressful to lead that kind of life,” she said. “You are under enormous tension when you are trying to make things work.”

There are in-depth conversations at the end of the simulation.

“It’s useful to take on the perspectives of other people,” Dr. Hodge said. “You don’t know what other people are dealing with.”

Demographics show that the No. 1 dropout in the county school district is the white male.

“Most of them never participated in extracurricular activities,” Dr. Hodge said. “Some of them had to work or to take care of siblings at home. Many times there was nothing going on at school that interested them.”

One way to combat this is to form clubs that appeal to a wide variety of interests, such as a guitar club or a green club.

“It gives them a chance to interact with an adult they don’t have a class with and who’s not necessarily a teacher,” she said. “They have an adult they can trust. We’ve been able to reach kids this way.”

Track and Field star Harris recognized by City of Lanett

LANETT — It was literally his day. James “Boomer” Harris celebrated his daughter’s seventh birthday and sent her off to... read more