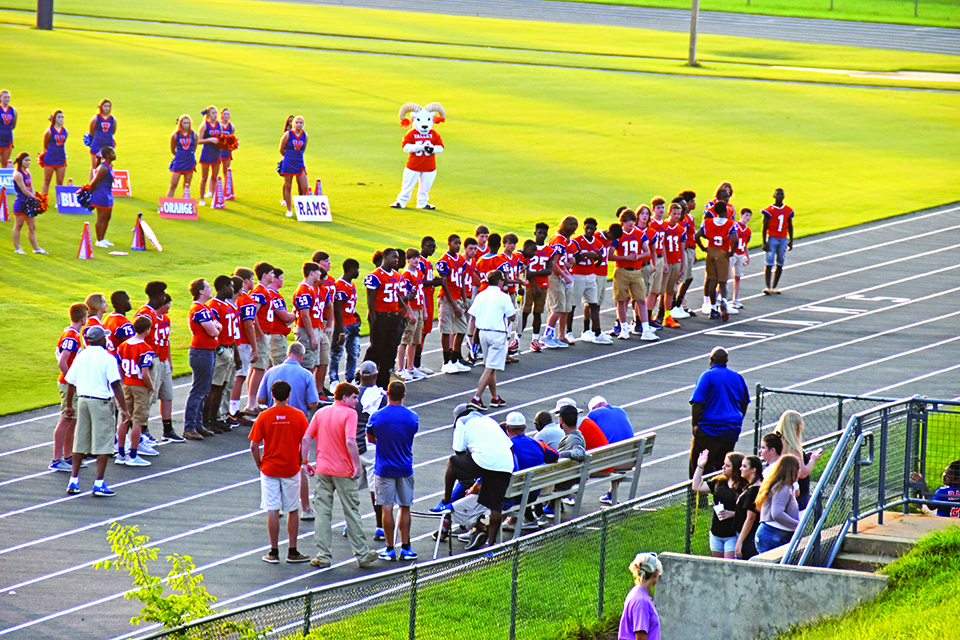 VALLEY — The Valley High School freshman football team lost in the final against Smiths Station in its season-opener on Monday, 14-13.

The Rams were up 13-0 with five minutes remaining in the fourth quarter before the Mustangs stormed back in the final minutes.

“We outgained them, outplayed them for the most part,” Rams freshman head football coach Thomas Hill said. “They ended up winning the ballgame. Special teams hurt. We had a lot of mental mistakes. It was just down the stretch. We were playing a good game for 95 percent of the game and had some fluke stuff happen at the end. Sometimes it goes that way.”

Special teams’ penalties and bad snaps proved to be the nail in the coffin for Valley. With 45 seconds remaining, Valley fumbled the ball on a bad snap and Smiths Station recovered the ball on the one-yard line. The Mustangs eventually punched in the game-winning touchdown on the ensuing one-yard drive.

Ty Kale Foreman had 15 carries for 142 yards and scored both of the touchdowns for Valley on the night. With fellow freshman running back B.J. Baker starting on the varsity level, Foreman now has more opportunity to improve, Hill said.

“Ty Kale has gotten a lot better,” Hill said. “Live game reps are only going to make him better when he becomes a varsity player to have that experience running the ball and how to run the plays that [Valley varsity head football] coach [Buster] Daniel has. To have 142 yards and two touchdowns, that’s a really good night and he was really outstanding.”

Dylan Earl and Jordan Benbrook lead the defensive attack with 10 tackles. Benbrook recovered a fumble and Earl racked up back-to-back sacks on a drive where the Mustangs were in the red zone.

“They were animals,” Hill said. “Those two were doing their assignments extremely well.”

John White went 3-for-5 in the air in his first start at quarterback. White is a good athlete who throws a good ball but needs more reps, according to Hill.

“He was on target with most of his passes,” Hill said. “We failed to give him pass protection at times. He ran the ball well on zone reads a couple of times. It’s one of those things he’s never done before, we have a lot of people like that and it’s definitely a learning experience. He has the ability to play quarterback. His teammates feel comfortable with him out there. He definitely can run and can throw, he just lacks the experience right now.”

In order to come out with a victory next week, Hill said that the team needs to tighten up on special teams as well as blocking. The ninth-grade Rams will go on the road to face Benjamin Russell next Tuesday night at 6 p.m. EDT.