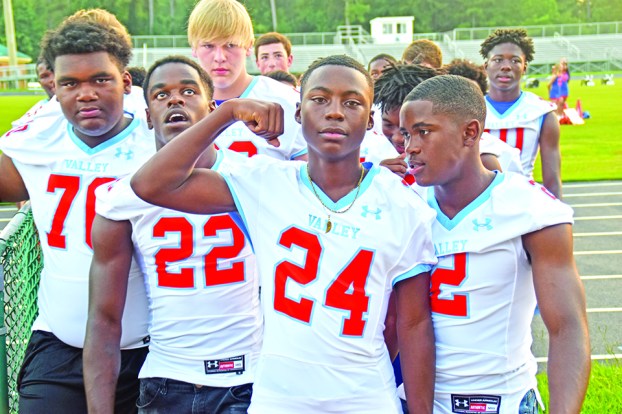 VALLEY — The night before Valley’s thrilling victory over the preseason 1A No. 1 Lanett Panthers, the school had a community-wide pep rally at Ram Stadium.

“It was really good,” Valley High School head football coach Buster Daniel said. “Anytime you can get out and talk about your kids, introduce all of the kids and see the cheerleaders cheer, it’s good. Lot of spirit and it’s just a good, fun time.”

Fans filled the home side of the stadium as each team, the players from W.F. Burns Middle, the ninth grade team and the varsity players were introduced to the crowd.

The band was at the 19th annual Band-O-Rama at Auburn’s Duck Stadium and players from the volleyball team arrived later at the stadium after playing at Lanett in Thursday’s season-opener. The Point University drumline performed at the event in the Rams’ marching band’s place.

As students and fans alike cooled down by snacking on Icee treats in the stands, Daniel gave a shout out to two older fans who stood up and danced with a Valley flag for most of the rally. He said that’s the energy that he wanted to see all of the students to have for the football team this season.

“That’s what we’re trying to build back,” Daniel said. “Get the community involved, support these kids. It’s not just football, support the cheerleaders, support the band, we need to support young people. That’s the biggest thing we can try to do right now.”

Winning was another key to getting the overall school spirit consistently back up, according to Daniel.

“Winning football games around here is going to make things a lot better,” Daniel said. “Winning creates a lot of good stuff so if we start winning some games, I think it’s going to turn around.”

The pep rally was one of the last ones for senior athlete D.J. Dunn, who’s started everywhere from quarterback to running back and defensive back in his time as a Ram.

“I love seeing everybody’s faces, some faces that I’ve never even seen before,” Dunn said. “I’m just happy to be here.”

When it came to making a position change, Dunn said the adjustment wasn’t that much of a burden to him either.

“It’s been amazing,” Dunn said. “I honestly love the coaches, I love everybody here and I have played multiple positions. I just love it all, I love being on the field all the time, 24/7.”

Dunn, like many other Ram seniors, has played under three head coaches in his time as a varsity athlete. This is now his second season with Daniel, a Valley native who came back after coaching in Opelika for over two decades.

“Like a second father, man I love him,” Dunn said. “Absolutely. He does everything for me, he gets me what I need to make sure I’m keeping with my grades and everything. I love him.”

LaFAYETTE — The LaFayette Bulldogs dropped a hard-fought pre-season game on Friday to the Handley Tigers by a score of... read more