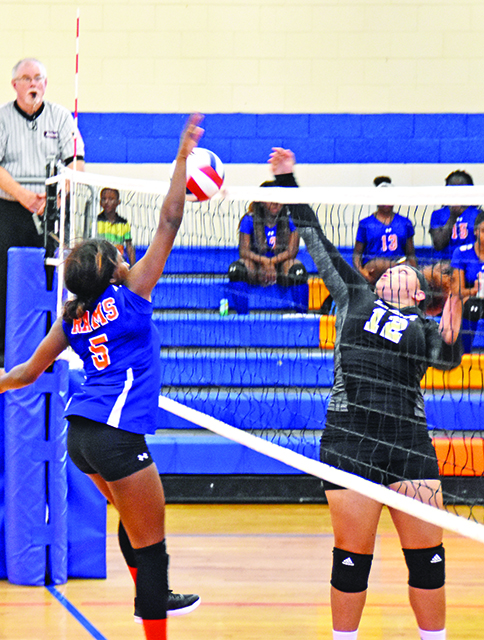 GOING THE DISTANCE: Thursday’s rematch between Valley and Lanett went the full five sets, with the Panthers coming out on top 15-13 in the final set. Photo by Rashad Milligan

VALLEY — A week after Lanett’s junior varsity and varsity volleyball squads swept the Rams at home, the Panthers took the trip across the Highway 29 bridge for a rematch at Valley High School on Thursday afternoon.

Last week, Lanett’s junior varsity squad surged past Valley in a packed gym backed by fan support and the Panthers’ varsity squad on the sidelines hyping them up. This week, it was the Rams who emerged victorious after going down early in the third set. Valley won the deciding set 15-12 in the stuffy Rams gym, where fans frequently fanned themselves throughout the afternoon.

Valley students began to create a student section toward the end of the junior varsity match, as athletes from other sports wrapped up practice.

After warmups for the varsity teams ended, the junior varsity teams from each school began chanting against each other from the bleachers. The “V-A-L-L-E-Y, you know!” And “L-A-N-E-T-T, you know!” Battle continued for the rest of the match.

The revenge mission continued in the varsity match.

Last week, the Panthers swept the Rams in straight sets after not winning a single set against Valley in recent seasons, head coach Krisse Story said.

On Thursday afternoon, the Rams appeared to go back to old ways and got off to an 18-9 lead in the first set. After the big start, Lanett senior Rtianna Oneal began serving for the Panthers and Lanett scored five consecutive times with Oneal at the helm, which forced a Valley timeout.

After another run by Lanett, Valley ultimately closed the set by taking it 25-22.

Both squads virtually went point-for-point in the second set. The largest margin early on in the set was three when Lanett took a 15-12 lead. The Panthers then went on a run after a Valley timeout and went on to win the set, 25-14.

Lanett went on to win the third set, 25-15 after a Panther went down with an apparent wrist injury.

Fatigue appeared to set in for Lanett in the fourth set. The Panthers began the set trailing in a 17-8 deficit. Valley took advantage and ran with the set, 25-14.

“I told them that we’re going to practice this weekend and we’re going to condition some,” Story said. “That’s when you have to go [fourth set]. You have to pull from deep inside to finish when you’re tired. We have to learn how to play tired so that’s where conditioning is going to come in.”

Oneal opened the fifth set serving for the Panthers, as Lanett got off to a 4-1 lead. Both teams had a new found energy in the deciding set with the Panthers pulling out the win, 15-13.

Valley returns to action next Tuesday at home against Tallassee. The Rams’ junior varsity match is scheduled to begin at 5:30 p.m. EDT.

“I feel like the girls have improved so much over the last week,” Valley head volleyball coach Fern Piper said. “They’re learning, they’re young. I’ve only got five or six that have ever played volleyball, even on the varsity. I am so proud of their heart and everything that they do for this team. They have put everything on the line for it, I couldn’t be made at them losing if I wanted to.”