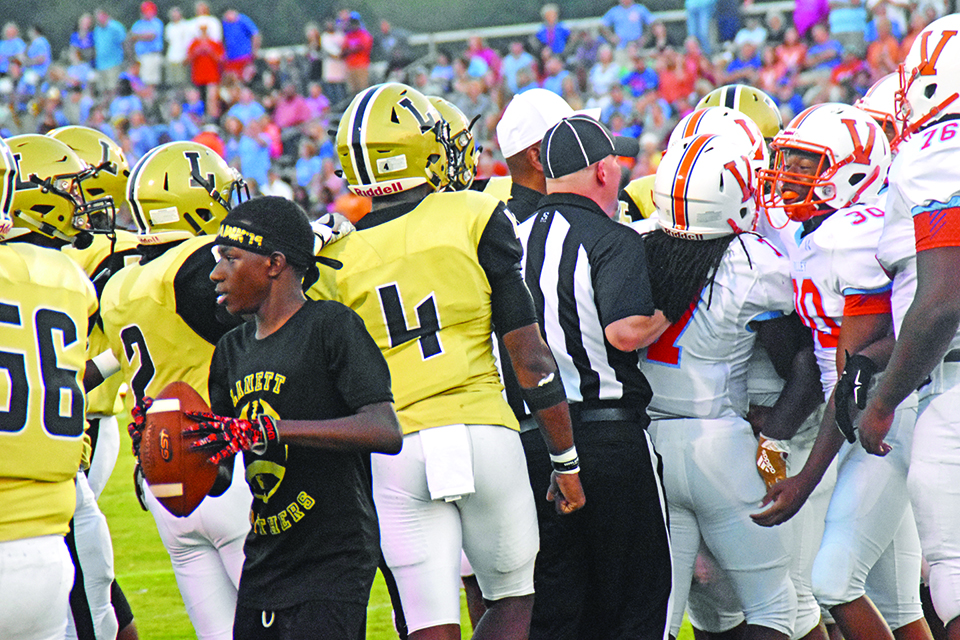 CROSSTOWN RIVALS: The Lanett Panthers and Valley Rams go back-and-forth with each other after a play. Photo by Rashad Milligan

LANETT – It was the newest chapter of a historic rivalry.

The season-opener of the Valley Rams and the Lanett Panthers went down to the final minute as the Rams came out on top 28-22.

“That’s a great football team over there,” Valley head football coach Buster Daniel said of Lanett. “They’re 1A, but they’re extremely strong. They’re going to win 1A football, I’m telling you right now. I’m proud of my guys, they fought. We had some adversity, they fought back, I’m extremely proud of them.”

The Panthers came out attacking Valley through the air as junior quarterback Kristian Story completed a deep pass to senior Trikweze Bridges. Lanett ended the opening drive with a touchdown pass to Zion Lynch.

Valley didn’t back down from the defending 2A state champs as B.J. Baker punched in a score at the start of the second quarter. The Rams scored again to take a 14-7 lead into halftime.

Lanett star senior safety Trikweze Bridges tied the game for the Panthers with a pick-six at the start of the fourth quarter. Valley responded quickly again with a touchdown of their own with 5:55 remaining.

The Panthers had to go 90 yards with about five minutes remaining in regulation.

Senior B.J. Smith had a breakout run to set up a Tifton “Dee” Dobbs touchdown pass with 4:05 left in the fourth quarter.  Story later completed a two-point conversion to take the lead, 22-21.

Valley had good field position getting the ball back after an onside-like kick from the Panthers. Freshman B.J. Baker continued to lead the Rams down the field and scored the go-ahead touchdown with 1:58 left.

“He did a great job,” Daniel said. “He’s still young. He made some mistakes. That’s on every kid. As long as he’s playing hard, we can fix the mistakes.”

After an undefeated 2017 season, the season-opening loss was a wake-up call for the Panthers, according to head coach Clifford Story, Jr.

“We needed that loss, honestly,” Story said. “Even though we tried to talk to them about practicing full speed, practicing hard, not getting the big head. We coached them up on all of the things that needed to be done but they see now that they’re not invincible. Some of them are still riding off last year and I just told them we’re not the same team as last year. We’ve got to grow in some areas and keep working. They’re going to do it, I have enough confidence in these boys.”

Lanett plays at LaFayette and Valley plays at home against Smiths Station next week.