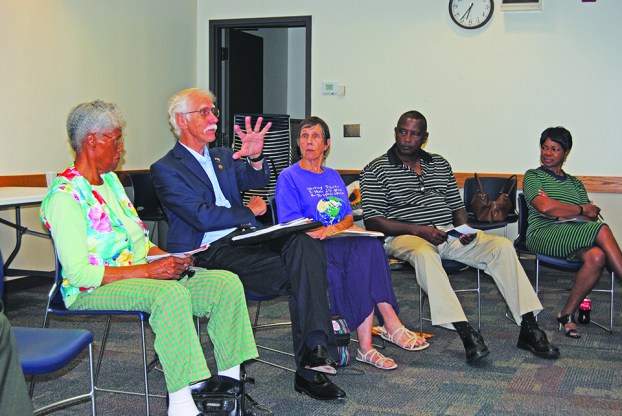 VALLEY — Lots of ideas on public policy were expressed Tuesday evening at a roundtable discussion hosted by the Chambers County chapter of the Alabama New South Coalition at Bradshaw-Chambers County Library. A collective wish list was compiled by people citing social needs anonymously on slips of brown paper left in a large plastic cookie jar.

One of the most frequently stated needs was how to get more citizens involved in the political process. In last month’s primary runoff election, for example, barely 11 percent of the registered voters in Chambers County participated. The statewide percentage wasn’t much better, with less than 13 percent taking part.

Three candidates for office, Sheriff Sid Lockhart, Probate Judge Brandy Easlick and Brian McGee, the Democratic candidate in the race for the House District 38 race, participated in the discussion.

“Much was made of turnout in the November 2016 general election,” said Easlick. “That was good, but still we had only 57 percent of our registered voters participating.”

Fredonia resident Judy Collins expressed concern over the enormous impact of big money donors controlling elections. She cited a recent column by Steve Flowers appearing in The Valley Times-News on ALFA’s domination of the state legislature.

Collins quoted the late Sen. John McCain on the preponderant influence of large contributions from large corporations and wealthy donors.

McGee, a U.S. Army veteran who served in the Vietnam War, cited the need for Medicaid expansion in Alabama. He said it would both help individuals in need and rural hospitals in the state.

Alfreda Fannings, wife of Fredonia Mayor George Fannings, seconded that view. She said that she sees heartbreaking examples almost every day of people who have very limited access to health care.

“They can’t afford their prescriptions,” she said.

Lanett City School Board Member Gwen Harris Brooks said that she was concerned about the safety of students in school.

“They see so much on TV about gun violence in schools,” she said. “They don’t need to be afraid of going to school.”

Several people present said they’d like to see the state and nation take a more proactive position on global climate change. McGee said he supported an initiative that seeks to get Alabama mayors to get on board with this issue, He said that it would be something similar to the Paris Accord.

“We need to have climate independence,” he said.

“There’s a distinct disinterest in voting,” said one man present the meeting. “People I talk to tell me that the issues candidates talk about does not involve them and people they know. What matters to them is how can they pay their power bill or where will their next meal come from.”

Another person said that our elected leaders should set good examples. Some state officials have fallen down in that category in recent years, they said, and the current president appears to have character flaws as well.

“We need more transparency from our leaders,” said another person. “It’s not good when the president won’t release his tax returns. We need to know more about those who represent us, not just the president.”

Dr. Randy B. Kelley, pastor of Goodsell Methodist Church in Lanett, said that there’s a gap in getting information to people.

“Average people don’t know much about politics,” he said. “They depend on people telling them what’s going on. We need to have a better dialog with the community. They key word is accountability.”

Dr. Kelley said that he found it disappointing when he went to public events, such as a county commission meeting or a city council meeting, that so few people were there. What happens at those meetings affects them and they should be there to know what’s going on, he said.

“A lot of times we expect too much of our elected officials,” he added. “People elect them and then just leave them there. The average person doesn’t know what an elected official can and can’t do.”

Pastor Weymon Johnson of New Birth Ministry said that there’s a recurring problem for people who get in trouble with the law.

“So many times when they leave prison they really want to change,” he said. “But there’s nothing for them. No one will hire them. We have a higher crime rate than we should because we recycle people right back into jail. They want a chance but can’t get job training. In many cases, they become homeless and get in trouble with the law again.”

“It’s a very complex situation,” Dr. Kelley said. “I’ve been told that there are some employers who will hire ex-felons, but they don’t want it to get out. They think it would hurt their business.”

“People who have gotten out of jail know they can make more money selling drugs than they can flipping burgers,” said another member of the discussion, noting the complexity of the problem.

Part of the problem, said Dr. Kelley, is that people drop out of school because there’s nothing that interests them in formal education.

“Technical education can be good for them,” he said. “We need carpenters, plumbers, painters and bricklayers.”

VALLEY — A Valley man is considering legal action against the City of Valley, claiming that they’d torn down the... read more