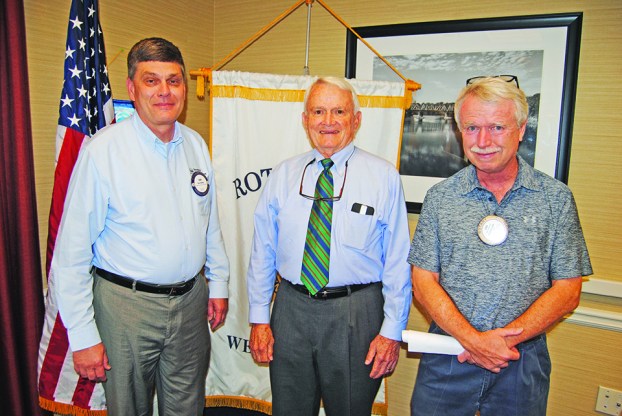 LANETT — Bill Bowling, the guest speaker at Thursday’s noon hour meeting of the West Point Rotary Club could have talked about a number of interesting topics, such as his family connection to Collins Drug Store in LaFayette, his memories of the Valley Rebels baseball team and going to many of their games, or the love he and his wife have for music; she’s involved with the LaGrange Symphony and he sings with the Sons of LaFayette choral group in LaGrange. What he did talk about was just as fascinating – his experiences as a young U.S. Army soldier during the testing of the atomic bomb in Nevada in the 1950s.

Many of those young men who were exposed to radiation died at an early age. Bowling, a native of LaFayette, was one of the lucky ones. He’s now 83 years of age and looks a good bit younger than that.

When he was a student at API (now Auburn), Bowling was in the school’s Army ROTC program. He was drafted into the Army his junior year. The Korean War was at its height at that time. After basic training at Fort Chaffey, Ark, and Fort Sam Houston in San Antonio, Texas, Bowling spent a year in Korea, mostly around Pusan. He and fellow soldiers were at the ready all the time.

“We kept our M-1 rifles cleaned and in good condition all the time,” he said.

After coming back to the states, he was asked if he’d like to volunteer for a special project in Nevada.

Being stationed just outside Las Vegas seemed exciting. Knowing his background as a pharmacy student, the Army wanted him to take part in a medical project. At the time, they were using soldiers as guinea pigs for testing near the sites of atomic bomb blasts in the Nevada desert.

“I saw 20 bombs go off,” he said. “When the ripples of those blasts get to you, you’d better be holding on to something or it will knock you across the room.”

One of the first tasks Bowling was assigned to was a pig detail.

“That was one of the worst days of my life,” he said. “The pigs came in on the back of a truck. They’d been there for 10 days and had had no place to use the bathroom. We had to clean them up the best we could and take them to what would be ground zero. They had to put them in foxholes, small buildings, jeeps and in tanks.

“The hard part was going back after the blast and getting what was left of the pigs out of the tanks. They wore heavy suits made of rubber and leather. It’s no fun being wrapped up like that on a day when the temperature is 120 degrees. To top it off, you have to go inside a tank and pull out a big pig.

Bowling noted how difficult it was.

“That was tough duty. My Army stories a little different from what you hear from most people,” he said. “Even when you turned your back to it and put your hands over your eyes, you could still see the blast. It was that bright.”

Bowling added that his wife still tells him he glows in the dark, causing much laughter in the room.

Bowling emphasized the danger of the job, noting that those who volunteered were put in harm’s way.

Nuclear energy was a new field at the time, and there was much experimentation going on to discover its effects.

The most dangerous tasks were done by those who were placed at ground zero.

“Some guys were in foxholes only 500 yards from the blast,” Bowling said. “Most of them died of radiation exposure. For those who survived, the government had to look after them for many years. For years I would get letters asking if I was okay and if I was having any kinds of problems. The only kinds I ever had were mental.”

Bowling added that U.S. ships were fairly close when the atomic bombs were tested near Bikini Atoll in the Pacific. A number of those sailors didn’t live long after that.

Atomic testing included building all kinds of structures near ground zero before a blast.

“They wanted to see what the effects would be,” Bowling said. “The main goal was to find out what would happen to civilians in the event an atomic bomb went off near them.”

During the testing in the 1950s  and 1960s, the U.S. had a total of 1,040 nuclear tests. Only a handful of them were above ground. The vast majority of them were underground.

Bowling said that the problem today with nuclear weapons is their proliferation. He added that the more countries that get nuclear weapons, the more dangerous the world we live in. Sooner or later someone will use them.

“Making bombs is not that hard, but you have to have the ingredients to do it,” Bowling said. “It’s hard to get Uranium 235.”

The U.S. remains the only country to have used nuclear weapons in warfare, having dropped atomic bombs on two Japanese cities in 1945.

LaGRANGE – It’s their final go-around. Madison McCartney and Kayla Lane have been playing alongside each other for nearly a... read more