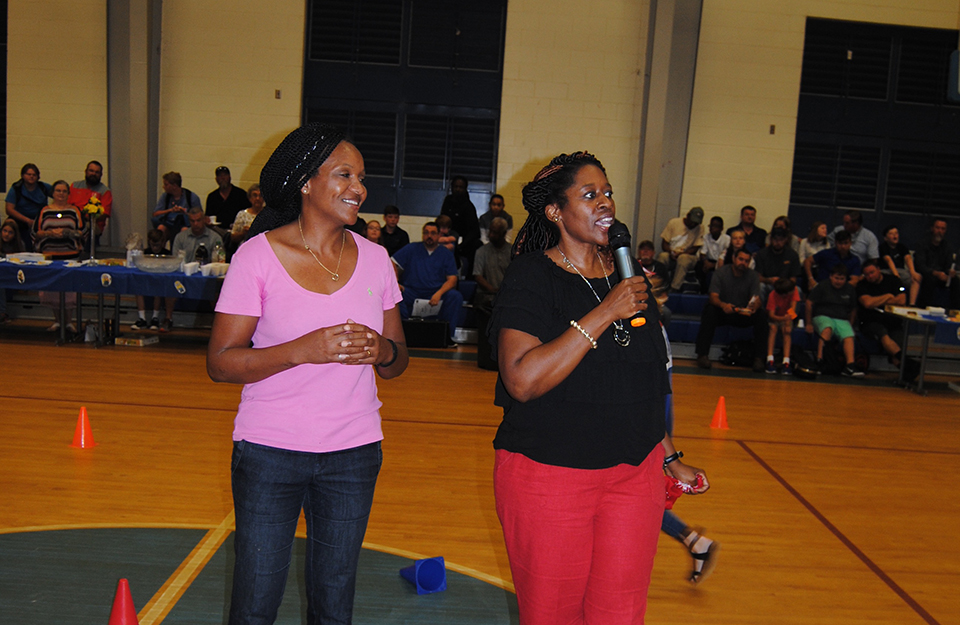 VALLEY — Officer Lawrence Howell was surprised at the turnout at a Thursday morning event in the gym at W.F. Burns Middle School.

“Other than a football game, this is the most dads I’ve ever seen at a school event,” he said.

It was the school’s first-ever Donuts for Dads, and more than 300 fathers of W.F. Burns students were there to show their support for their children. It was a standing-room only crowd with every seat filled on all four sides of the gym.

“This is a wonderful turnout,” said Dr. Frankie Bell, the school principal. “This is better than we expected. God is faithful to us. This proves it.”

Jonathan Herston of the Circle of Care Center for Families spoke to the big group about the impact dads have on their children. They are not only the breadwinner, the love they have for family needs to be expressed.

“Kids need to hear that they are loved every day,” he said.

Herston added that verbal and written “I love yous” mean so much to a child along with appropriate physical touching.

The Circle has a Strengthening Families program where participating dads learn from each other.

Pastor Karanja Story of Rehoboth Baptist Church talked about a Mentoring, Empowering and Nurturing, or MEN, program that local pastors are involved in. At 7 a.m. EDT on Mondays, they visit different schools in the local area to talk about the important roles dads have.

“It’s awesome to see all these fathers out here today,” said Minister Warren Goss of the Berean Church. “It’s great to see so many of them stepping up to be the kind of men God created them to be.”

Moses Willis, the father of sixth-grade student Tristan Willis, was pleased with the way things turned
out.

“This was an excellent program,” he said. “It was very inspiring. It’s something that’s much needed in this community. I’m really looking forward to this school year.”

Dr. Bell thanked Isaac Whorton for coming to the meeting and making a contribution to a pizza party the school will be having on Monday. She also thanked other local sponsors who have made donations on behalf of the school, among them Carol Brumfield of BEC Electric and Josh Sims of Flowers Bakery.

Some moms accompanied their husbands on this special day for the guys. They were told they are going to have their day, too. Friday, Sept. 7 will be Muffins for Moms Day at W.F. Burns. In October there will be a Grits for Grandparents Day.

Dr. Bell said that this had been a most rewarding day. She said that it had been very difficult for her to have earned a Ph.D. but days like Thursday made it all worthwhile.