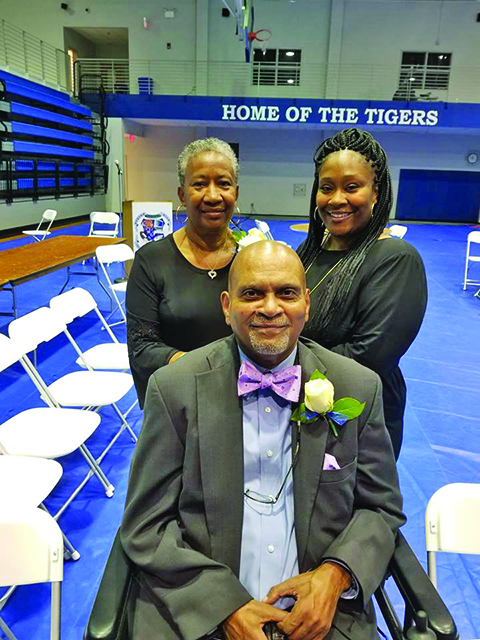 At the ceremony, which was also an event held for his 71st birthday, Tolbert was told that Auburn High School’s basketball gym would be named after him.

“I felt good because that’s the only school system I ever worked in,” Tolbert said. “I never worked at another high school and I started working in ‘69 at Drake High School before they had integration. Then in 1970, I moved to Auburn High School.”

At Auburn, Tolbert compiled 770 wins, 28 state playoff appearances to go with the 2005 6A state championship.

One of Tolbert’s many former coaches includes Lanett assistant football coach Earnest “E.J.” Webb, who was one of the people to attend his Sept. 1 retirement ceremony.

“He’s more than a coach,” Webb said. “He’s more of a father to me. I can call him anytime and he will answer! If you do something wrong, he will let you know, that’s the man he is. I’ve been around him since 1999 and he’s never changed. He’s strict, firm and fair.”

On July 29, 1994, Tolbert was diagnosed with Guillain-Barre Syndrome, which paralyzed him and left him in a wheelchair. After the diagnosis, Tolbert missed two years of coaching but returned to Auburn to continue inspiring another generation of student-athletes.

“It’s not something that I thought about, it just sort of happened,” Tolbert said of his diagnosis. “I couldn’t stay at home, I had to do something so as soon as I could I had to get back to work. I gritted it out. It’s something you’ve got to fight, you’ve just got to have mental toughness. You’ve got to be tough.”

Tolbert’s mental toughness allowed him to see the day where his school won a state title. One thing he’ll remember from that experience is one of his player’s, former Georgia Tech cornerback Dominique Reese, walking beside him into the arena during the final four and asking him how it felt to be a state champion. Tolbert responded that it felt good and Auburn went on to defeat a school from Mobile that was ranked No. 1 in the nation. It was the team’s first boys basketball state championship.

Tolbert also won a state championship as a coach with the track and field team.

Currently, the Tolbert family has spread throughout the Greater Valley Area and Atlanta but everyone made it a priority to make it to the special event at Auburn High School. The gym’s court was already named after Tolbert but he said he understood that he probably had to retire to have the gym named after him, so that’s exactly what he did.

In retirement, Tolbert continues to volunteer at the Lee County Youth Center to inspire the next generation.

“Work hard, do your work, your academics come first anyway and then you do the other things you need to do,” he said.