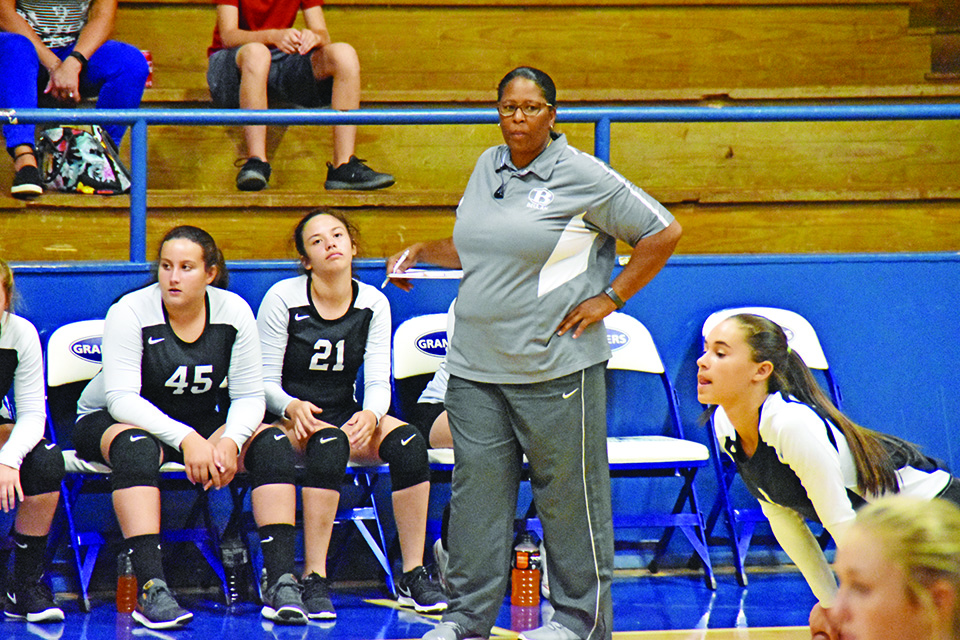 “We actually played pretty well,” Beulah junior high head volleyball coach Sabrina Milligan said. “LaGrange’s much bigger and taller than us. I’ve got some seventh graders out there that played some big minutes.”

The Bobcats came out aggressively and won the first set. LaGrange didn’t begin to push away until the score was 16-15 in the second set when the Grangers went on a 7-point streak.

“Allee Ballard really stepped up with her passing,” Milligan said. “We served really good, Jasmine Karch, she had a bunch of good serves today. My captain Amya Dunn got some hits in, I didn’t think we were going to be able to hit over them, so she did pretty well there.”

After Dunn and LaGrange’s two captains met with the referee at midcourt, the third set began and Beulah delivered the first punch getting out to a 6-3 lead. LaGrange’s power, however, proved to be the difference in the deciding set of the match.

“We’re still young,” Milligan said. “My team is 12 and 13-years-old. The future is bright as far as volleyball goes.”

The varsity teams then ran onto the floor as popular hip-hop music blasted through the arena’s speakers.

The varsity Bobcats got off to a slow start, getting behind 11-4 in the first set. Looks of frustration covered the team’s faces as LaGrange won the set 25-16.

Beulah got off to a hot start in the second set, sneaking in an impressive ninth point on LaGrange’s left sideline to lead 9-3. The Grangers came fighting back and ultimately took the lead at 10-9.

In the middle of the set, Beulah senior Kensley Taylor began to serve and the Bobcats never looked back.

The Bobcats increased its lead to 24-18 with Taylor serving, as the competitive athlete didn’t even crack a smile after her aces in the set.

“I just try to keep everything cool, calm and collected,” she said. “If I mess up, I just wipe it off, start again and play the best I can.”

Beulah won the set 25-19 as the junior high team exploded in cheers on the front row of the bleachers watching the older peers in the program.

“I love it, having a good fan base and being able to celebrate our teams from any sport we have, it’s great,” Taylor said.

The Bobcats’ momentum continued in the third set, taking a 5-1 early lead when Taylor showed her first emotions of joy on the night. The Grangers didn’t go down without a fight, however, and kept the set close the entire way. Beulah ultimately pulled off the road win as LaGrange missed the ball on offense for the final point of the night.

“The girls played really well,” Beulah varsity head volleyball coach Allison Aikens said. “We had a rough game yesterday so for them to rebound and play as well as they did today, I’m extremely proud of the girls.”

Beulah’s varsity squad will bring a couple of junior high players with them this weekend as the Bobcats go to Wadley for a tournament on Saturday.