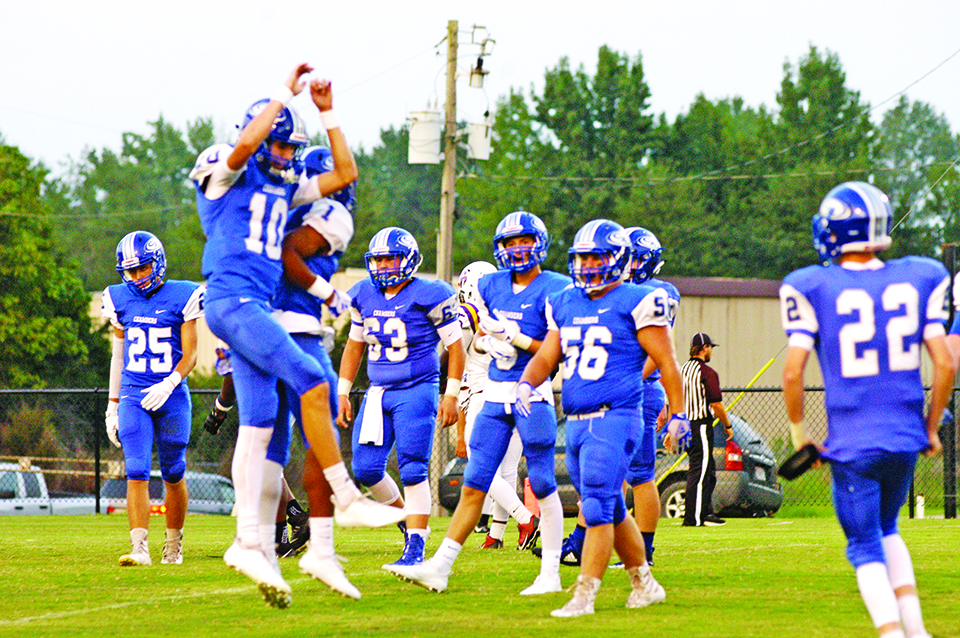 STREAKING: No. 7 Chambers Academy has won 27 regular season games in a row.

ABBEVILLE —It was another week of dominance for the Chambers Academy Rebels this past Friday night as the team defeated Abbeville Christian Academy, 41-14. The Rebels have now won 27 regular season games in a row and have outscored its opponents 136-14 so far this regular season.

“I think they’re hungry to keep that going,” Chambers head football coach Jason Allen said of the winning streak. “They understand that we can play a lot better than how we’ve been playing.”

This week, the Rebels open regional play against Cornerstone Christian before entering the most challenging stretch of the regular season in Allen’s eyes. In the period, Chambers will face Southern Academy, Springwood School and Kingwood Christian.

Working on team discipline by decreasing the number of penalties and developing a serious passing threat over the top of the defense are two things that Allen wants the team to improve headed into the key games. Pass protection and route running were a pair of specific examples Allen provided on how the team could improve its passing attack.

“The better we’ll get throwing the football, again as I said all summer, I don’t think we’ll ever be a 50-50 balanced team as far as run and pass,” Allen said. “We’ve got to be a threat to score deep on you or throw the football on you over the top to make it a little easier for ourselves in the box. I think we’ve accomplished that to a degree but I think that we can get better at that.”

The difference between the current team and past undefeated teams, however, is the defensive corps. This season’s team features the best defensive unit that Allen has ever coached, he said.

“We get after it on defense and try to smother you,” he said. “We had one bad defensive drive the other night, we let Abbeville score on our ones, of course, the last touchdown came in the waning moments of the game against our backups but our defense has really been lights out. It’s fun to watch. We really physical and we get a lot of hands to the football.”

The Rebels moved up from the preseason No. 8 ranking to No. 7 in the latest Alabama Sports Writers Association (ASWA) state rankings for the Alabama Independent Schools Association (AISA) last week. Chambers faces Cornerstone Christian on the road this Friday at 7 p.m. CDT.