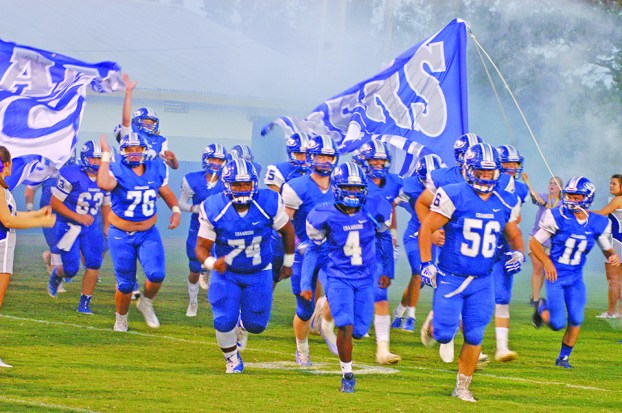 Wayne Clark | Times-News rebel charge: The highly motivated Chambers Academy Rebels took to the field on Friday and made quick work of Southern Academy, rolling up a 35-0 halftime lead and winning the game by a 48-14 count. The team will be back at home next Friday for the annual clash with Springwood.

LaFAYETTE — The Chambers Academy Rebels exploded to a 35-0 halftime lead over visiting Southern Academy and coasted to a 48-14 win to keep their perfect record intact at 4-0. It was a solid, workmanlike win over what was probably the best team they’d played so far this year. Senior running back C.J. Lyons had three touchdown runs and sophomore quarterback Payton Allen two TD passes to lift the Rebels to that big halftime lead. Allen finished the game with 217 yards passing.

“I thought we played a solid game all the way around,” said Coach Jason Allen. “I was well pleased with the way we played on defense. They were lights out and set the tone for the game early on. Our offense was dialed in, and the offensive line blocked well and protected the quarterback. The only negative for us is that we turned the ball over a couple of times. We will have to work on that.”

The Rebels drove the ball 64 yards on their opening possession to take a 7-0 lead with 6:18 left in the opening period. The running of Lyons and the passing of Allen highlighted the drive. Chambers got the first TD of the night on a beautifully executed pass play. Allen took a deep drop and lofted a perfect pass to Jordan Gillespie, who had his man beaten by a couple of steps.

After forcing Southern to punt on their next possession, Chambers was in business once again on their end of the field. They wouldn’t be on their side of the 50 for long, as Allen and Lyons teamed up on a screen pass down the Southern sideline to the 29. A nice run by Gillespie off the left side of the line advanced the ball inside the 10, to the eight. Two plays later and the Rebels were in the end zone for their second score of the night, this one coming on a four-yard run around left end by Lyons.

Allen’s kick was wide right, leaving the score 13-0 with 3:57 left in the opening period of play.

The Rebels got their third score on a 72-yard drive early in the second period. Lyons had his best run of the night to get them close, running from his 32 to the Southern 33. Two plays later, Gillespie ran off the left side of the line for 15 yards and a first down on the 18. From there the visitors gave ground grudgingly but Chambers toughed it out, getting a score on a four-yard run off the right side by Lyons, who fought his way past a host of would-be tacklers to dive for the orange pylon on the south end of Torbert Field. That made it 19-0 Chambers with 8:26 left in the half. On the conversion, Gillespie raced in off a big hole in the left side of the line to make it 21-0.

The Rebels had their most dominating series of plays moments later. The first big play was Lyons interception in the end zone to stop Southern’s lone scoring bid of the half. On Chambers’ first offensive play from the 20, Allen and Gillespie connected on a beautiful pass play down the home sideline, advancing the ball all the way to the Southern 29. On the next play, Lyons rocketed up the middle through a gaping hole and dragged a host of players into the end zone. That made it 27-0 with 5:01 to go in the half. A try for two points failed.

The Rebels had one more score in the late going to add to their lead. The 74-yard drive was kept alive at one point by a bit of trickery. On fourth and 15 from the 19, Payton Allen dropped back to punt. With no one rushing off the left side, he ran the ball up the home sideline all the way to midfield and a first down. A pass from Allen to Caydon Smoot got it to the 40 and another first down. Another sideline pass from Allen to Gillespie moved it to the 13. Gillespie did a great job of keeping his feet inbounds on the play.

After a four-yard loss on first down, Peyton Allen rolled left and found Braxton Allen wide open in the left flat. He gathered the ball in and raced past a couple of defenders for the end zone for Chambers’ fifth TD of the first half.

That made it 33-0 with 36.9 seconds left in the half. The Allen-to-Allen connection worked so well on that play Chambers tried it again on the conversion with more success. This time, Allen rolled right and found the other Allen open in the flat. The pitch and catch made it 35-0.

The big halftime lead allowed Coach Jason Allen to clear his bench in the second half.

Pretty much the entire team got to play. The backup players played on even terms with the visitors, with each team scoring a couple of TDs. The game ended with Chambers on the long end of a 48-14 score.

The Rebels will be back home next week with the annual cross-county rivalry with the Springwood Wildcats. It’s the kind of game where you can throw out the record book.

Chambers is rolling along with a 4-0 record and Springwood is 2-2, but that won’t mean much when the teams tee it up at 7 p.m. CDT next Friday.

By Rashad Milligan On a week where every team in the Greater Valley Area was either ranked or received votes... read more