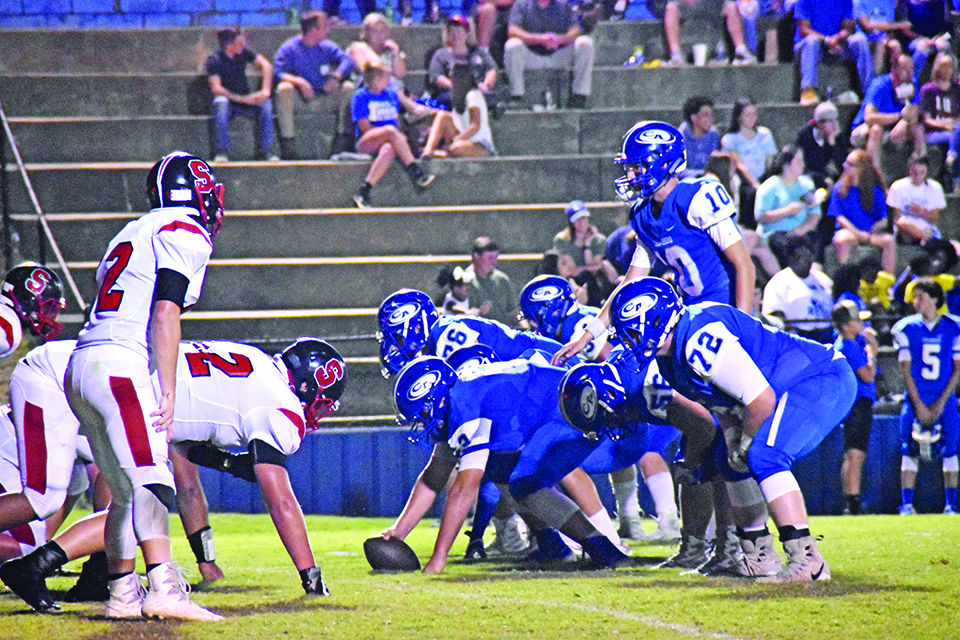 LINING UP: Chambers Academy quarterback Payton Allen prepares to go under center in the first half of the Rebels game against Springwood School on Friday night. Photo by Rashad Milligan

LaFAYETTE — It was just another week of business for AISA No. 4 Chambers Academy. The Rebels topped rival Springwood, 49-14 on Friday night at home. Chambers has now won its 30th regular season game in a row.

“I thought we came out strong early,” Chambers Academy head football coach Jason Allen said. “We kind of  flexed our muscles a little bit and we were able to run the ball and throw efficiently, we played really lights-out defense. I’m just proud of the way our guys played. We had a big lead and then we kind of cruised in from there.”

The Wildcats came into Friday night’s game as one of Chambers’ tougher opponents. After a 2-0 start, Springwood found itself as the AISA No. 10 team.

Now, Springwood is in a funk after back-to-back losses to AISA No. 2 Autauga Academy and Chambers. The Wildcats have dropped three consecutive games on the year.

“It’s a rough stretch for us right now,” Springwood School head football coach John Gartman said. “We’ve got a pretty good football team, we’re just going through a rough patch. I told the kids at the end of the game that there are better days ahead. I think we have a chance to make this one of the more successful seasons that Springwood’s had when it’s all said and done. We have a lot of playoff possibilities ahead of us, so there’s a lot to play for.”

It is worth noting that Springwood played without star senior linemen Sam Leva, Chris Ramseur and athlete Chalyb Lenker, who were out due to “an internal issue,” according to Gartman.

The game began like most rivalries do, with physical runs and a host of penalties called on both sides of the field.

After a few runs from sophomore O.J. Tolbert and senior Dylan Anderson, the Wildcats lined up as if they were going for it on fourth down on the team’s first drive. Springwood ran down the play clock, hoping for the Rebels to jump, before calling a timeout and punting the ball.

In between a Chambers fumble that was called back, Rebels sophomore quarterback Payton Allen led his offense down the field with patience and precision. The 6-foot-3-inch athlete consistently spread the ball throughout the field, completing passes to Jordan Gillespie, Braxton Allen and Hayden Harris.

“He’s trained his whole life for this,” Jason Allen said of Payton. “I think he’s really coming into his own, he’s really gaining a lot of confidence, he had a throw or two that he’d like to get back but for the most part, he gives us a chance to knock you out with the home run ball over the top. He’s very accurate on the intermediate or short game. He’s a general for our team and the kids look to him, he leads us.”

Senior Rebels running back C.J. Lyons then ran for two consecutive first downs to get Chambers in the red zone. Lyons read the Wildcats defense coverage well, juking and falling forward when tackled to gain more yards than he did the play before.

Hayden Harris ultimately scored the touchdown on the drive to draw first blood for Chambers Academy.

On the next Rebel offensive possession, senior Jordan Gillespie ran for a 50-yard touchdown on the first play of the drive with 5:20 remaining in the first quarter. The Rebels would miss the extra point attempt after the score.

Chambers senior running back Braxton Allen then ran in for a touchdown with 2:44 remaining in the first quarter and Gillespie walked in for the two-point conversion.

Tolbert tried to provide a spark for Springwood to begin the second quarter, wrapping up a Chambers receiver emphatically and the two schools began talking to each other on the sideline.

A couple of plays later, Tolbert recovered a fumble for the Wildcats.

On Springwood’s next drive, Lyons returned the favor with an empathic wrap-up tackle of his own. The Wildcats didn’t cross midfield on the drive.

Gillespie ran in for another touchdown and two-point conversion with 6:45 remaining in the first half to increase the Rebels’ lead to 29-0.

Plank attempted to scramble himself and create some offense for Springwood before the end of the first half but he was unsuccessful.

After a long run after a catch from Braxton Allen, Harris scored again to give the Rebels a 36-0 lead going into halftime.

Lyons opened up the second half scoring with an 80-yard touchdown run with 8:29 remaining in the third quarter.

Coleman Hull got Springwood on the board with half a second to spare in the third quarter with a touchdown.

Hull caught a pass for another touchdown with 6:39 remaining in the fourth quarter.

Next week, Springwood travels to Morgan and Chambers travels to Kingwood Christian.