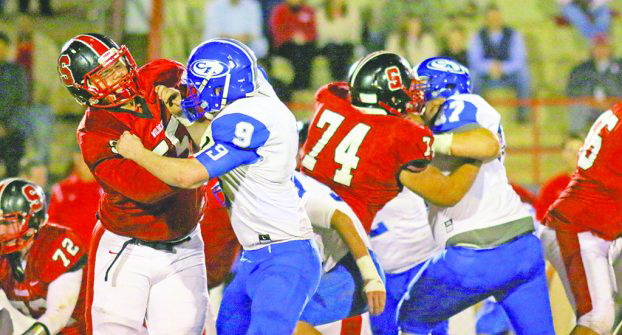 Regardless of records, rankings or winning streaks, all outside factors go out the window in rivalry matchups.

Last season, 3-7 Springwood gave eventual state runner-up Chambers Academy a 44-35 competitive game. This year, the AISA No. 4 Rebels are hosting one of its more competitive opponents of the young season in the 2-2 Wildcats. Springwood was ranked as the AISA No. 10 squad after starting 2-0 in wins against Success Unlimited and Cornerstone Christian.

Springwood is led by the senior linemen duo of Sam Leva and Chris Ramseur and the running back tandem of O.J. Tolbert and Dylan Anderson. Chambers Academy has a lethal running attack of its own led by C.J. Lyons, Jordan Gillespie and Hayden Harris. Quarterback Payton Allen also had an impressive showing last Friday night through the air.

The only other undefeated team in the area is the surprising Beulah Bobcats, who are traveling to face Southside Selma tonight, currently 0-4 on the year. Beulah is led by senior quarterback Lonzie Portis, who is holding down the fort for the team that played without its leading tailback and linebacker Caden Dowdell last week.

2A No. 9 LaFayette is making the trip to 2A No. 3 Reeltown tonight. The Bulldogs have played a tough schedule so far this season, suffering losses to 1A No. 1 Lanett and 2A No. 5 Thorsby in its first three games of the year. Last week against Thorsby, LaFayette carried a 14-6 lead midway through the third quarter before ultimately falling 18-14.

Lanett looks to continue its winning streak tonight at Notasulga. Although the Blue Devils fell to Spring Garden last week, Notasulga defeated Autaugaville 52-0 two weeks ago. Lanett is coming off of a 48-0 victory over Autaugaville itself. The Panthers are led by senior Trikweze Bridges, who celebrated his 18th birthday yesterday. Bridges grabbed his 31st career interception last week, which is just five shy of the state record.

GHSAA 4A top teams Troup County and Chapel Hill will meet in LaGrange tonight. The Tigers are coming off of a huge win against Callaway, where Kobe Hudson’s touchdown pass to Jamari Thrash went viral after Thrash blew a kiss to his defender on the way into the end zone.

Valley returns home this week to host 2-1 Carroll. The Rams are coming off of a 14-7 road loss to Greenville. Valley is now 2-2 on the season and both 1-1 at home and on the road.

Valley out sized by experienced Brewbaker