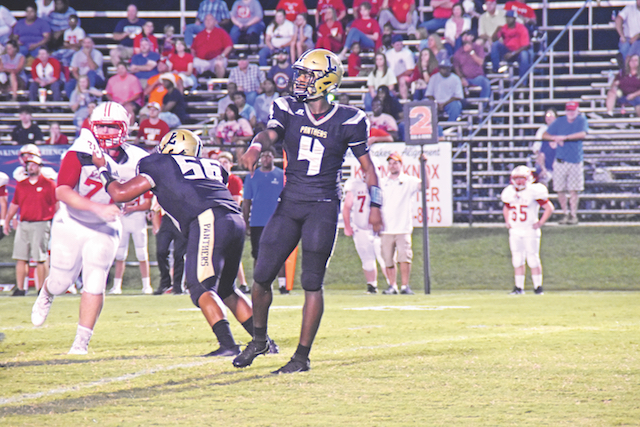 Kristian Story and the Lanett Panthers are back in action tonight. - File

On a week where every team in the Greater Valley Area was either ranked or received votes to be ranked in the state, schools are prepared to return to the gridiron tonight.

The most heated battle will occur in Georgia, when a pair of undefeated squads take the field in AAAA No. 6 Troup County and AA No. 2 Callaway. Callaway is led by five-star running back prospect Tank Bigsby while Troup County’s Kobe Hudson, a four-star Auburn commit, leads the Tigers.

In Alabama, 2A No. 7 LaFayette travels to meet 2A No. 6 Thorsby in a region matchup. The Bulldogs are coming off of an impressive 40-0 shutout win over Vincent. LaFayette is 1-1 on the season after dropping the season-opener 35-7 to 1A No. 1 Lanett. LaFayette senior quarterback Jae’lin McCurdy has been one of the team’s top athletes this season on both sides of the ball.

Lanett travels to face the winless Autaugaville in the school’s second region game tonight after defeating Wadley 33-15 last week. The Panthers junior quarterback Kristian Story has broken out for at least one long touchdown run in each of the last two games.

AISA No. 4 Chambers Academy hosts 2-1 Southern Academy, in a game that Rebels head football coach Jason Allen expects to be the most competitive of the season to date. Chambers has outscored opponents 193-21 so far this season.

Springwood School looks to bounce back at AISA No. 2 Autauga Academy after a 44-13 loss to Edgewood Academy last week. The Wildcats were ranked No. 10 coming into last Friday night after a 2-0 start with season-opening wins over Success Unlimited and Cornerstone Christian. Autauga Academy is currently 2-1, losing to North Florida Christian 16-6 but are coming off of a 12-1 season in 2017.

Beulah has the community’s attention with an undefeated 3-0 start, already matching last season’s win total. The Bobcats play its homecoming game tonight against Prattville Christian in a chance to move up into the 3A state rankings next week.