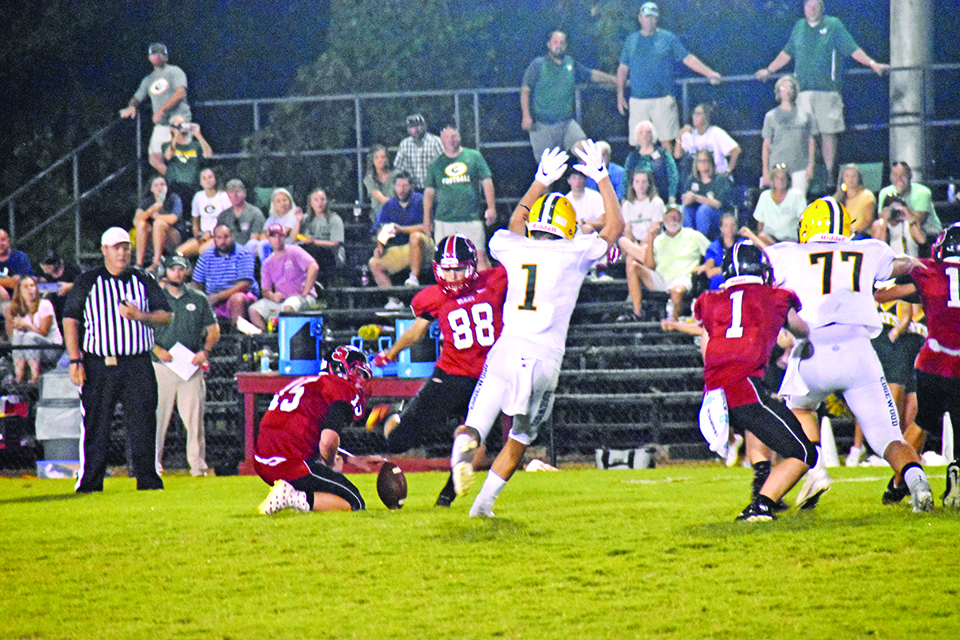 THE KICK IS UP: Springwood’s Coleman Hull attempts a field goal at the end of the first half. Photo by Rashad Milligan

LANETT — The direction of a game can change in an instant.

The narrative of No. 10 Springwood losing to Edgewood 44-13 went down differently than the scoreboard tells it.

Springwood only trailed by a single touchdown early on in the game before Edgewood scored four consecutive touchdowns on the night.

On the defensive side of the ball, senior Chalyb Lenker led the Wildcats with eight tackles. Senior Mitchum Smith recovered a fumble as well. Trent Craft contributed seven tackles in the effort as well.

The Wildcats had a target on its back coming in as a ranked team this week.

After a Springwood turnover in the second quarter, a fan from the Edgewood sideline shouted out “No. 10 in the state, boys!” to the crowd. Gartman said he didn’t believe the ranking had anything to do with the outcome and that the team was just simply outplayed and outcoached this week.

Gartman left the team with optimism on Friday night.

“You learn more about yourself by how you respond to adversity,” he said. “We will get back to work on Monday.”

The Wildcats will travel to face Autauga Academy next Friday. The Generals were 1-1 heading into Friday night.