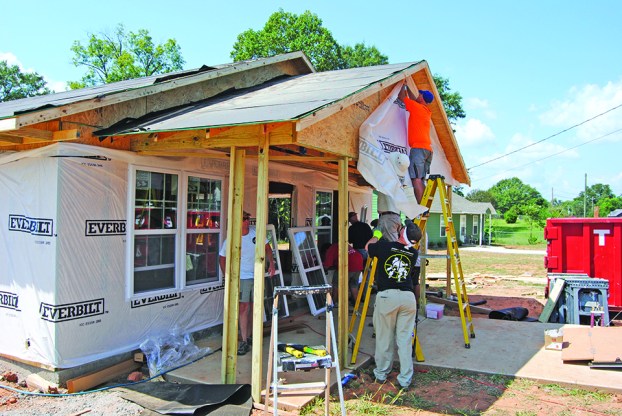 A LOT OF WORK IN TWO DAYS: The exterior of a new home has been taking shape on Huguley Road in Valley. Approximately 25 people from the First Baptist Church of Valley and New Birth Ministry had the house dried in Friday afternoon. By the end of the work day, the windows and doors were in and felt was on the top.

VALLEY — Approximately 25 volunteers from the First Baptist Church of Valley and New Birth Ministry met their goal of having a new Chattahoochee Fuller Center Project home dried in a two-day period.

“This has been a wonderful group to work with,” said house captain Doug Dewberry Friday afternoon. “When we started from a concrete slab Thursday morning our goal was to have it dried in and locked up in two days. This has been a very successful build, very nice.”

The weather was very hot and dry both days, but it didn’t keep down anyone’s spirit.

“Our whole purpose in doing this was to spread the gospel in the community,” Dewberry said. “This is our local mission project for this year. A couple of our members, Jeff and Christy Nettleton, were helped by the Fuller Center several years ago. They wanted to give back, and this gave them a chance to do it.”

The Nettletons live in the Fairfax community, across the street from Sue’s Chic Café. Their home was chosen for a CFCP rehab project. They were able to get some new walls along with some new plumbing and electrical work.

“When we found out that our church was going to do a Fuller Center project we wanted to help,” said Christy. “It means a lot to us that we were able to participate in this.”

Dewberry said that Phase One of the build has been completed and everyone will be back for Phase Two, which will start on Monday, Oct. 8.

“We’ll have to do all the interior work,” he said. “Our goal is to have it finished by Friday of that week.”

The plan is to have two new homes completed that day, CFCP Numbers 41 and 42.

The second home will be going up on East 7th Street in West Point. The concrete pad will be poured on Monday, with the walls being raised and the house being dried in next Thursday and Friday. CFCP No. 42 is being built in memory of Cliff Glover. Mayor Steve Tramell will be the house captain. He’ll direct a work crew made up of employees of Norbord and Knauf.

VALLEY — Members of the Greater Valley Area Chamber of Commerce and local leaders packed out the showroom of King... read more