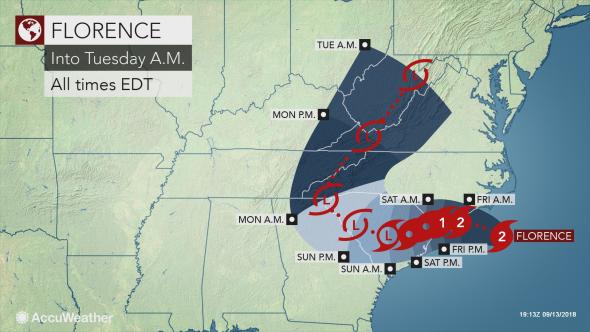 MONTGOMERY — While Hurricane Florence is an extremely dangerous storm for North and South Carolina, it’s not likely to pose any significant danger to the state of Alabama.

“At this point, the chances of Florence’s impacts to Alabama are extremely low with minimal rainfall,” said Alabama EMA Deputy Director Monique Smith. “There’s a five to ten percent chance of tropical storm force winds reaching eastern Alabama Friday night. This is due to the fact that the strength and coverage of the wind field will decrease after landfall. Confidence is increasing that the center will begin a northward turn on Sunday, then turning northeast on Monday.”

Florence was predicted to make landfall on Friday morning with sustained winds of around 110 miles per hour. On Thursday. tropical storm force winds were extending outward up to 185 miles from its center. Storm surges were predicted to be between two and six feet in South Carolina and 6-13 feet in North Carolina. Areas along the coast could get between 20 and 30 inches of rain with some isolated areas getting up to 40 inches.

According to Smith, Alabamians need to keep an eye on Isaac, which is barreling across the Atlantic and could be in the Gulf of Mexico by next Thursday. Two other Atlantic storms, Helene and Joyce pose no threat to the U.S.

Kia unveils new model to be produced in West Point

By Daniel Evans – Special to the Times-News WEST POINT – The Kia plant in West Point is getting ready... read more