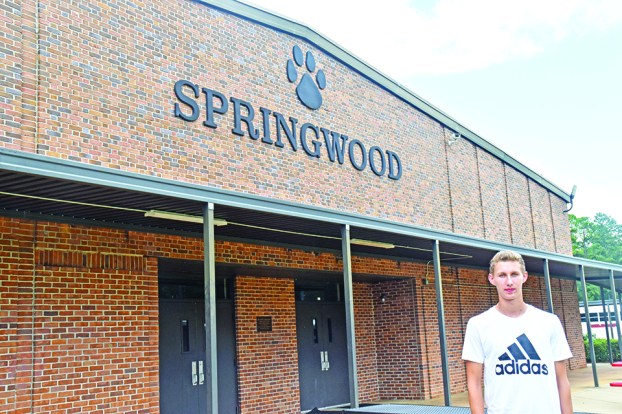 FOR A GOOD TIME: Unverricht will only be attending Springwood School for the first semester this school year before heading back to Germany next January. Photo by Rashad Milligan

The 16-year-old German native eventually connected with an organization that allowed him to be an exchange student in the United States. Unverricht ended up being one of the inaugural students to live in the newly-renovated International House of Springwood.

He’s a student from one of the five countries represented in the dorm at Springwood School. Unverricht had arguably the most eventful summer of the students after placing first in the German U18 Track and Field Championships in the 400m hurdles.

Now in the southern region of the United States, Unverricht has started to play a different game.

“I started playing football and I enjoy it,” he said. “It’s way different than track, what I do back home and I think I’ll have a great experience.”

On John Gartman’s Wildcat football team, Unverricht is a defensive back and running back. In the week two win against Cornerstone Christian, Unverricht played in the final five minutes and recorded his first tackle.

He began watching the NFL on TV two years ago in Germany, where he can only watch a limited amount of games, while only seeing only American college football game in his life.

As far as German football goes, Unverricht played briefly as a young child before discovering track. Track and Field is a sport his twin sister was involved in about six months before he was.

Outside of track and football, Unverricht said that he’s gone shopping in Auburn and has eaten at a restaurant in downtown West Point.

Since he’s only here for the fall semester at Springwood, he said that he wanted to eventually live with a family to get a better feel of American culture. Unverricht has had to make the adjustments to a new school system in addition to playing a new sport. Back home, he didn’t run on his school’s team, he ran with a club team and usually practiced by himself or with a couple of other coaches. He said that the friends on the football team at Springwood are probably closer than the friends at the track and field club team back in Germany because the student-athletes at Springwood spend the entire day together.

Unverricht is also adjusting to the academics at Springwood. He said that the schedule of going to the same classes every day can be difficult at times because he’s used to attending courses on alternate days in Germany.

Panthers pull away after early defensive battle with LaFayette

LaFAYETTE — For the second straight season, 1A No. 2 Lanett dominated 2A No. 5 LaFayette. The Panthers won the... read more