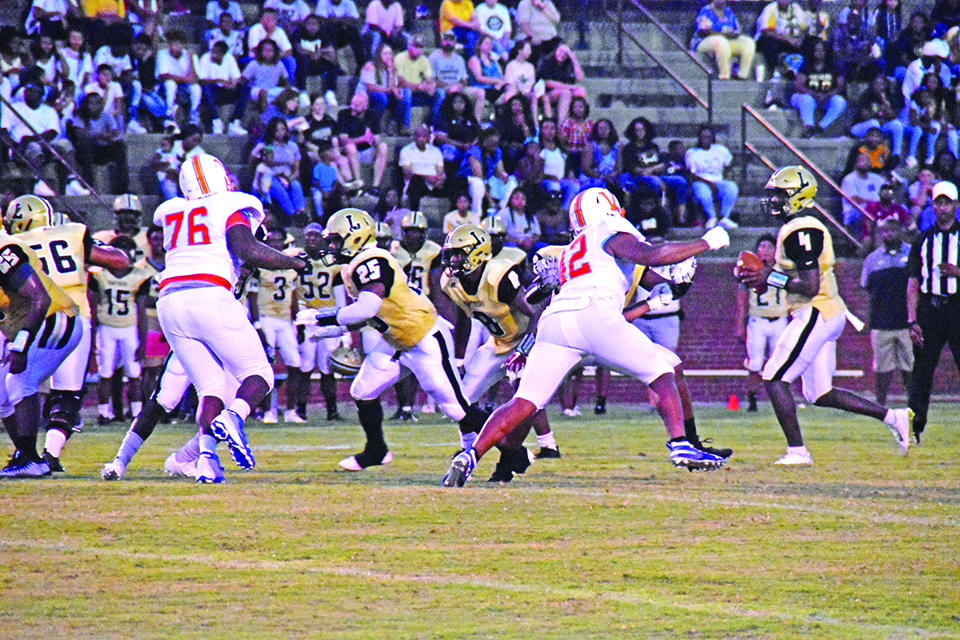 BACK AT IT: Kristian Story and the Lanett Panthers are back at home tonight against Handley. Valley goes on the road to Marbury. Photo by Rashad Milligan

Most teams in the Greater Valley Area are going on the road tonight to kick off the middle and second half of their respective regular seasons.

1A No. 1 Lanett is the only team at home tonight, hosting 2-2 4A Handley. The Panthers have won four games in a row and shut out Autaugaville and Notasulga in the last two weeks. The Tigers are coming off of a 42-26 loss to Childersburg last week. With four games remaining in the Panthers’ regular season, Lanett senior safety Trikweze Bridges currently has 32 career interceptions, which is four shy of the state record.

LaFayette is playing the closest road game tonight, traveling to Notasulga for a matchup with the 2-3 Blue Devils. The Bulldogs fell out of the 2A state prep rankings this week after losing to 2A No. 3 Reeltown last Friday night.

AISA No. 4 Chambers Academy travels to 5-1 Kingwood Christian. The Lions should present a challenge to the Rebels, who have outscored opponents 284-42 this season.

“We stay humble,” Chambers head football coach Jason Allen said. “We talk about it every day in practice. We talk about staying humble in life, staying humble in football and we work hard. I think if you work hard, you keep your nose to the ground, then you don’t have a whole lot of time to look around and say, ‘hey, look what I’ve done.’ That’s what we try to push with these guys. We want to get better every day, every week and we’ve had a lot of blowouts but that’s not a bad thing. We’re going to situate the positives and keep working on the negatives.”

Springwood is going to play at AISA No. 8 Morgan Academy, which marks the Wildcats third-consecutive game against an AISA-ranked opponent. Last Friday night, Springwood lost to rival-Chambers Academy in a game that didn’t feature seniors Chris Ramseur, Sam Leva and Chalyb Lenker, who were all out due to “internal issues” according to head football coach John Gartman. Lenker participated in a cross country meet for the school that weekend and placed fifth.

GHSA 4A No. 5 Troup County travels to 3-1 Sandy Creek. The Patriots are coming off of a bye week after a 55-21 win over Starr’s Mill on Sept. 14. The Tigers are coming off of a 56-24 win over Chapel Hill. Troup County is led by junior-Auburn commit Kobe Hudson, who is making a surprise push for Georgia Player of the Year throwing for 1,514 yards and 18 touchdowns as well as rushing for 327 yards. Hudson was recruited to Auburn as a wide receiver. So far this season, Hudson’s primary target has been Jamari Thrash, who has caught 16 passes for 364 yards and seven touchdowns.

Valley is heading on the road to face 0-4 Marbury. The Bulldogs are coming off of a 44-18 loss to Shelby County. Valley has lost its last two ball games by a combined total of 11 points. The Rams have racked up a pair of impressive wins earlier in the season over Lanett in addition to a 41-20 win over Beauregard.

Beulah has the week off, carrying a 5-0 record into a road matchup against Bullock County next Friday night.