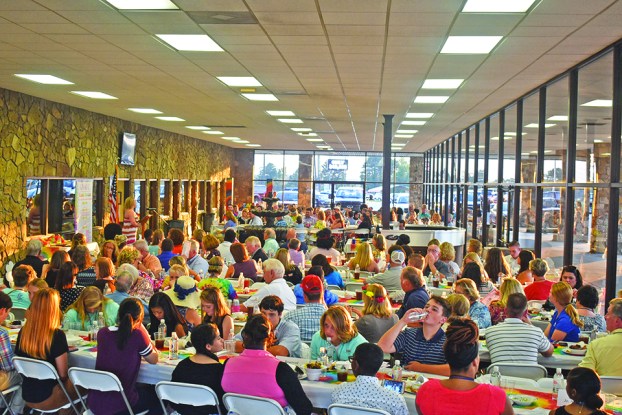 MEMbership meeting: Representatives from every Chamber of Commerce member were at King Ford Thursday night to reflect on the past year of GVACC accomplishments and get a peek into the future.

VALLEY — Members of the Greater Valley Area Chamber of Commerce and local leaders packed out the showroom of King Ford in Valley Thursday evening to celebrate and reflect on the last year of GVACC accomplishments and ongoings during the 2018 Annual Membership meeting.

Before Executive Director Ashley Crane took to the podium in order to start the program, guests went through the wraparound dinner buffet, featuring local food from restaurants like Pokey’s 8th St. Grill, Johnny’s Pizza, and Momma G’s served up by their employees, volunteers and even Sheriff Sid Lockhart.

Anyone observing the 15-foot-long table-laden showroom floor saw a plethora of tie-dye covering the walls, tablecloths and chamber members as the theme of this year’s meeting, as it was GVACC’s 55th year, was “Flash back to the 60’s.”

Once everyone had their plates full to the edges and a cold Chattabrewchee beer in their GVACC-branded koozies, chamber president Bill Gladden welcomed them all before passing the mic to Crane.

“Tonight we will reflect back on the past year and will look towards the future of the chamber of commerce for our businesses and communities,” she began.

After recognizing the night’s sponsors and chamber ambassadors, Crane named Bethany Roughton of Farmers and Merchants bank the “Chamber Ambassador of the Year,” given to the member who spent the most time helping with the year’s activities.

“We have a board in our store where past employees would come in and sign the board, anybody that had ever worked there,” said Al Parker, owner of Parker’s Foods in LaFayette. “The names that are on that board now are really just a drop in the bucket of people that have worked there for the past 55 years… I owe all that to them, the employees that got us here today. And my wife, Melony, she takes care of everything at the house so that I can run the business.”

The final award given out Thursday night was “Community Mover and Shaker.” It went to Adrian Holloway of Chattahoochee Hospice, who Crane said won thanks to her dedication to the chamber and community.

“I was very surprised to say the least and I am very appreciative that they identified that I do what I do just because I love it,” Holloway said.

From there, Crane continued by listing off the Chamber’s accomplishments, including the 69 newly-recruited members, monthly and quarterly events, plethora of ribbon cuttings and many partnerships, especially the newest one with Universal Class.

Crane attributed the past year’s success to Marketing and Events Manager Carrie Royster.

“She has recruited all 69 new chamber members that are here with us in our membership, as part of our family today,” she said.

To close the program, Crane spoke about the future of the Chamber, announcing that GVACC will soon move to a new location in Valley.

The organization is currently renting space from the development authority, but expects to have their own offices by the beginning of December that they will utilize to continue their planning of events and area networking that they do every day.

“These two are going down in the books as some of the best executive director and staff we have ever had at the Chamber of Commerce,” President Gladden said.

The rest of the night was highlighted by the 60’s themed costume contest, which tasked the room with voting on the best-dressed chamber members by applause. Representatives from the Valley Times-News dressed as the cast of Gilligan’s Island ended up being the fan favorite.

VALLEY — The Valley Police Department is currently looking for a four-month-old child, Kaylee Roxanne McGill, who has been missing... read more