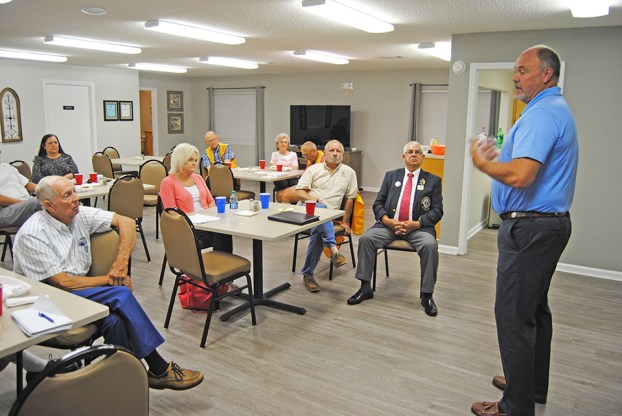 TIME FOR A WATER BREAK: Mitchell Hamilton (at right) talked about a ministry he directs at Monday’s meeting of the Valley Lions Club, held at Sylvia Word Manor. Water Break Ministries is a 501(c)3 non profit that connects over 900 coaches in the Southeast.

VALLEY — Mitchell Hamilton is well known in the local area after having been the head football coach at Lanett High and later on at Springwood School. He was also the athletic director at Springwood for several years. He’s now heading up Water Break Ministries and is widely known as the chaplain to the coaches.

Hamilton was the guest speaker at the Monday evening meeting of the Valley Lions Club and talked about a ministry that’s fast gaining traction among high school coaches throughout the Southeast.

“It’s an unusual ministry,” Hamilton said. “After having coached high school football and basketball for 30 years and being an athletic director for 22 years gave me a good background into what God has now brought into my life.”

The inspiration for Water Break took place in 2007 when Hamilton had one of the most challenging days of his life.

His world had turned upside down that week as his father fell critically ill and passed away at 6:15 p.m. on a game night.

“Everything that could have gone wrong that week did,” he said.

To top it off, his Springwood Wildcats lost badly that night.

“I felt a burden as a head coach,” he said. “I couldn’t help but think that if I had been there the game might not have been the disaster it was. It just ate at me. Lots of people told me I did the right thing by being with my dad and that they were praying for me.”

That message really stuck with Hamilton when it came from a fellow head coach.

“He knew what I had been going through in getting ready for a game on Friday night. Hearing that lifted his spirit and he started a new routine on game night. I’d come home after the game and google coaches praying for coaches,” he said.

It strengthened him and moved him to help other coaches in the same way. He went to a Bowden family football camp and asked legendary coach Bobby Bowden for five minutes of his time. Knowing that the Bowden family patriarch was a man of deep faith, Hamilton sought him out for advice.

“I told him that God had put in on my heart to do something for other coaches,” he said. “I will never forget him telling me that if God had told me that I’d better do it.”

After returning home, Hamilton sought out his high school coach, Dan Washburn, and asked him for advice.

“I almost fell out when he told me the exact same thing Bobby Bowden had told me – that if God was leading me to do something I’d better do it,” he said.

In 2009, Hamilton started a coaches praying for coaches movement. It started out small, but in less than ten years it has grown by leaps and bounds.

“We now have close to 1,000 coaches taking part,” he said. “We have participating coaches in Alabama, Georgia, Florida, Tennessee, Arkansas, Mississippi and Texas.”

In August, Hamilton traveled to hundreds of schools in the Southeast sharing five-minute Water Break stories with thousands of high school football players and hundreds of coaches.

“I made sure that they heard God’s word,” he said. “I want coaches to be strengthened and influenced by what we are doing with Water Break. We will go anywhere people call us. God moves in our Water Break. Those who take part in it can feel the power of prayer. Coaches appreciate us talking about God.”

Hamilton said that he loves to tell the story about Jeremy, a former player of a Water Break participant who was wounded in Afghanistan while serving in the military after high school.

Through the Water Break network, Jeremy was told that coaches back in Alabama were praying for him. That lifted his spirits immeasurably.

“That could be nothing else but God,” Hamilton said.

Hamilton said that a coach from Point University had asked for his daughter to be on their prayer list.

She was in need of a transplant. The word about her got out through Water Break, and the coach’s daughter received a call from Montgomery high school coach Jimmy Perry, who’d had a kidney transplant.

“That’s pretty special,” Hamilton said. “That’s what Water Break is all about.”

Through Water Break, Hamilton has gotten to know Lee McBride, who he likens to a modern-day Jerry Clower.

“When people ask us what they can do to help, I tell them that $10 a month will keep us going,” Hamilton said. “We have an annual banquet, and it gives us a chance to talk about what it means to us to share the gospel with kids. It’s not just coaches who are involved. Friends, school groups and church groups are involved, too. If you love praying for people Water Break wants you.”

Hamilton said that Water Break is all about family.

“Family means holding on and no matter what, never letting go,” he said. “Family means being there and listening with a loving ear, without judgment. Family is one of the highest forms of unconditional love.”

Water Break Ministries may be contacted at WB coaches@gmail.com or Wbcoachesministries.com.