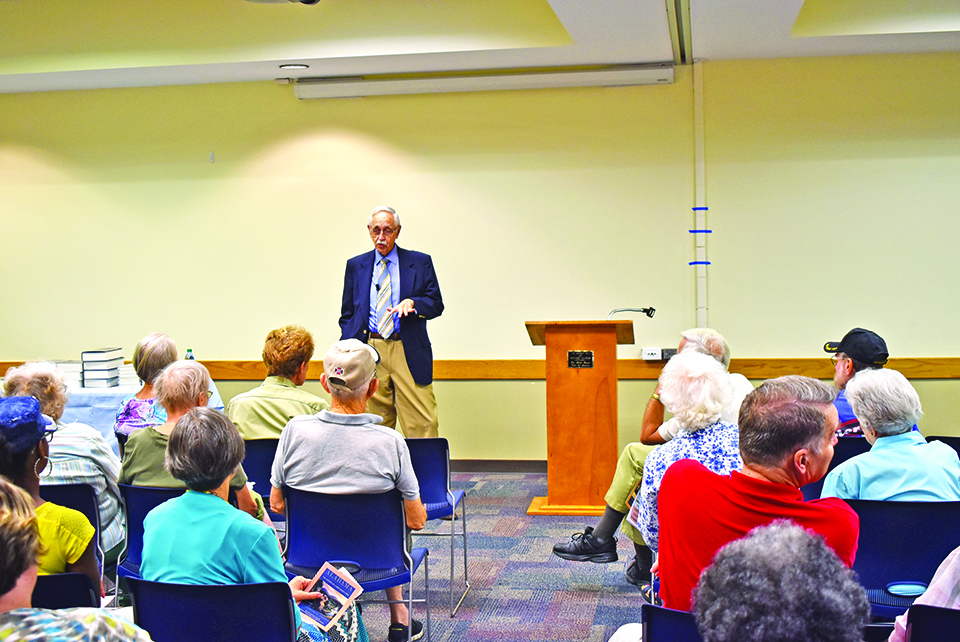 The history of the state: Dr. Wayne Flynt spoke in front of a packed room, discussing the good and bad parts of Alabama history that make the state what it is today.

VALLEY — On Wednesday afternoon, Bradshaw-Chambers County Library was full of people interested in the state they reside in. The one to lecture them on the subject for an hour after lunch: Alabama historian Dr. Wayne Flynt.

Flynt was there to present “The Richness of Alabama Culture,” a collection of his findings from decades of chronicling the state that contrasts it’s tendency for political corruption with the brighter side of its history.

Library Director Mary Hamilton introduced Flynt at the top of the noon hour by sharing some of his accolades and awards. The Professor Emeritus has taught more than 6,000 graduates at Auburn and Samford University, in 1992 was selected by Mobile Register as Alabamian of the year and won the Hugo Black Award for service to Alabama and the nation in 2003, to name a few.

Flynt started by saying how he preferred smaller places like Chambers County to present at because of the lack of attendance in bigger cities.

“[This is] where you meet ordinary people who live extraordinary lives,” he said.

He gave a brief personal history thereafter, recounting his family’s past and how his wife actually grew up in the Valley, being born in Langdale hospital and having a father who preached at Fairfax First Baptist Church.

“She is a Valley girl and that does not mean California,” he joked.

His main point of discussion throughout the hour was how Alabama is changing thanks to the technological progress being made throughout the I-85 corridor which is the “75-mile stretch from the Kia plant in Georgia, right through the Chattahoochee Valley, across the river, through Auburn/Opelika to Montgomery and down south for about 10 miles in I-65 where Hyundai is.”

Flynt talked about the state’s historical hesitance to change its ways, dating back to the first state constitution all the way up to the current decade.

With a strictly single-party government, he said, there is no progress but rather politicians working for personal financial gain.

He cited state numbers to support his claim, enlightening the audience to Alabama’s rank as first in political corruption according to the Illinois State University Institute for Corruption.

“I’ve got to tell you what you don’t want to hear,” he said. “I’m trying to make you feel good about the place you live, but on the other hand I am a historian and I’m supposed to be objective… I have described Alabama, warts and all. And we have some warts.”

He ended on a high note, however, circling back to the progress being made thanks to the I-85 corridor.

He pointed to examples like the uptick in this area’s Korean population, the fact that there are 40 different spoken languages at Auburn High School and how there is a Japanese restaurant as soon as you get off the highway at exit 79.

“I bet that wasn’t there when my wife was growing up in the Valley,” he said. “The world, she is a-changing.”