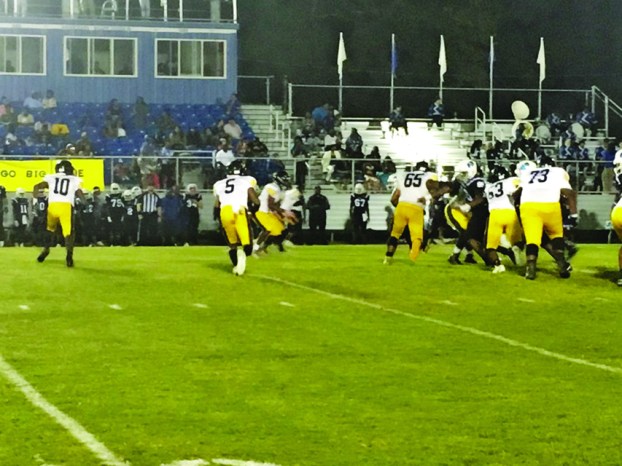 SPOILED NIGHT: LaFayette bounced back Friday night with a 41-20 win over Notasulga on Friday night. It was Notasulga’s homecoming game. Photo by Bryce Johnson

NOTASULGA — Lafayette spoiled Notasulga’s homecoming on Friday night with a 41-20 victory. This ends the Bulldogs two-game skid as they look to stay ranked.

Adversity is a first half thing apparently for Lafayette.

As the clock hit zero to signal the end of the second quarter, Lafayette’s defense still couldn’t believe what just happened. Each player stared into nothingness with their hands on their heads as the defensive coaches showered them in shouts that voiced their displeasure. Notasulga running back,  Derrick Brown, had just run for a 46-yard touchdown weaving his way through every level of the Bulldogs defense, a common theme through the first two quarters. The players shuffled back to the visiting locker room without a sound, deadlocked in a 14-14 tie.

They came back with a roar.

The Bulldogs took the opening kick deep into Notasulga territory, and two plays later they were celebrating in the end zone thanks to a deep ball provided by Jae’lin McCurdy on the run. His third touchdown pass of the night. The game was no longer close after that.

Lafayette’s new energy could be felt the entire second half, especially on defense.  In the first half  Lafayette couldn’t do anything to stop the Blue Devils’ rushing attack but after the intermission, the players had finally listened to the coaches’ pleas to watch the ball.  Outside of a lone touchdown in garbage time, the Blue Devils could not break through for the rest of the night.

This team doesn’t lack any confidence, to say the least.

With each stop and turnover, the raucous Lafayette crowd couldn’t contain their enthusiasm. Actually, they didn’t contain much of anything all game. At times they were louder than Notasulga’s crowd even on homecoming night. Whether it was confusion over a play call or cheering after a big play, the Bulldog faithful could be heard throughout the game.

“Our crowd is amazing,” Boston-Gaines said. “No matter where we go. We could go to Alaska and our crowd will come and they are going to show love.”

Lafayette looks to continue their success as they play Fayetteville next week.

Undefeated Beulah will get its due sooner than later

Despite having the best start in the last 20 years, the 5-0 Beulah Bobcats weren’t ranked in the latest Alabama... read more