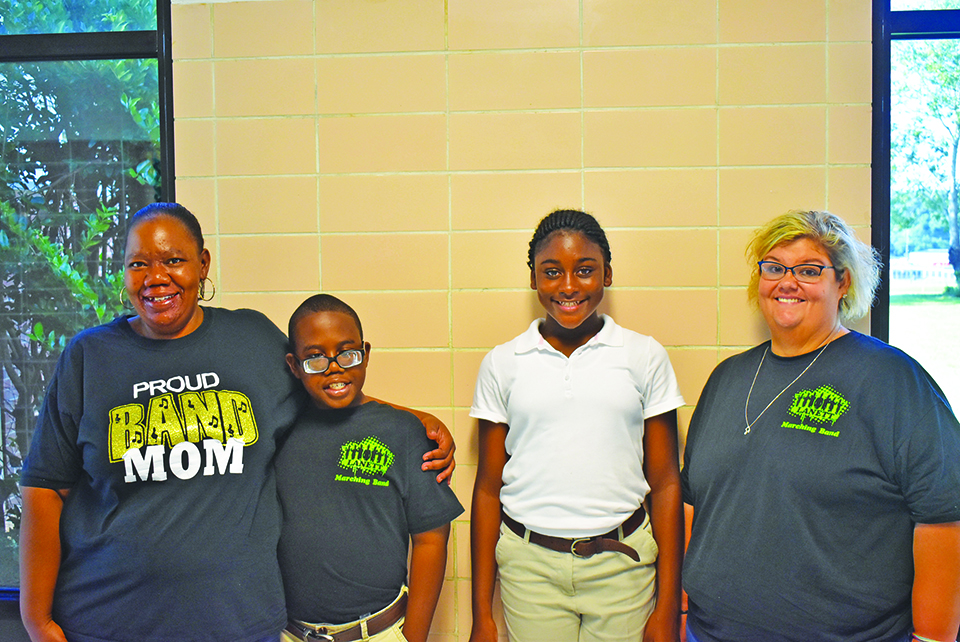 LANETT — LaTae Benton’s passion for music started at a young age. Since he was in kindergarten, his mom, Lashonda Benton, said he was playing on the piano with no instruction other than the songs he heard at church.

“When I was little in kindergarten, I saw a piano and I just played,” Benton said. “That’s why I like music.”

Something else that Benton has carried with him since birth is his congenital glaucoma, otherwise referred to as childhood glaucoma. He is still able to see, read and carry on like any other seventh grader, but some activities, like using his musical talents to perform in Lanett High School’s band, require a little help.

That’s where Makayla Floyd came in. Makayla is an eighth grader at Lanett who, when asked, jumped at the opportunity to give Benton a hand.

“My friend asked me if I would like to be a manager and I said yes, because I like to help people,” she said.

According to band teacher Leslie Dyson, Makayla’s assistance came after a realization at this year’s band camp that while Benton definitely had the musical ability, he needed some assistance. Makayla agreed and they started working together on formations, songs and everything else related to performances.

“She comes to practice even if he’s not there, learns the sets, she is part of us in the stands, it has just been a good experience for everybody,” Dyson said.

Makayla keeps a hand on Benton’s shoulder to lead him through the steps of the performance. Although he needs the help in moving around the field, the music comes naturally. Benton plays most of the music by ear, not referring to sheet music during performances. He said that “Carry On My Wayward Son” is his favorite song to perform during the halftime show and was confident in Lanett’s football team this year.

“I’m glad I’m in the band, I like being on the field,” he said. “Makayla helps me because when the football lights are on I can’t really see and she helps me march.”

Dyson has known Benton since he first began playing music for the school and said that he works hard in practice even as a natural musician. She described his and Makayla’s partnership as an embodiment of the band’s beliefs.

“Our show theme this year is “We are Family,” she said. “I think that is a great theme for the whole band. It really showcases what the band is here. We are a family and this is just one example of that.”