Local returns to the Valley to share his story 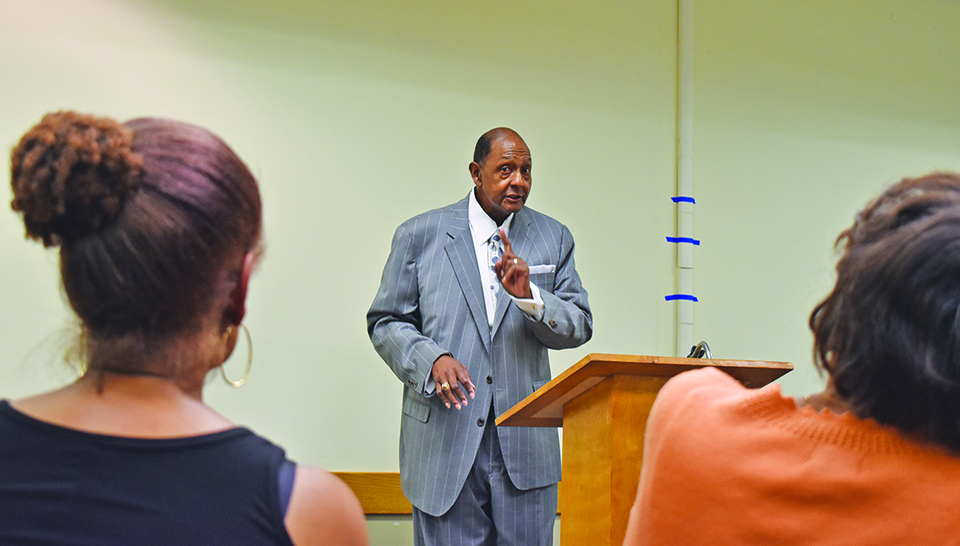 VALLEY — Dr. Terry Harrison, a Fairfax native who has spent a lifetime pursuing education in different parts of the country, visited Valley on Thursday, Sept. 27 to promote his new book, “Climbing the Ivory Tower: 101 to 999,” and to share his story with his home town.

Standing at the lectern at the head of one of Bradshaw Library’s meeting rooms, Harrison spoke to those in attendance about his upbringing, his philosophies on life and how he owes all of that to the Greater Valley Area.

Starting with his young life and how he yearned for education even at the age of five, Harrison went from point to point, telling his story in a non-linear and extremely detailed way. All while keeping the room laughing and engaged, he talked about having to grow up without a father figure, talking W.F. Burns himself to let him attend school and his constant work that helped him reach ends meet.

During the discussion, the thread he wove throughout his tale was that of perseverance, determination and making sure to thank those who help you along the way.

“I’m standing on the shoulders of the elders in the Valley,” he said.

Harrison spoke on the obstacles thrown his way as an African American in the South during the time he was growing up. Whether it was having to defend himself from bullies in predominantly white neighborhoods on his way to school or having to take weekend courses to ensure he got his doctorate degree, he said that hard work and deep faith were the keys to success.

“When I got ready to write this book I made sure that there was something in there for the young people who would be coming in my footsteps so that they realize ‘do not let the obstacles in your life slow you down,” he said. “Don’t sit around complaining about what you can’t do, just do what you can do.”

Harrison said that he planned to return to the Valley in the coming years as “there is no place like home.” He reflected on how, through his educational, military and professional career, he had achieved his goals and was happy with the results.

“Im done,” he said in conclusion. “My bucket list is finished. All I have to do now is keep living.”

Harrison donated a copy of his new book to Bradshaw Library which is available to the public.