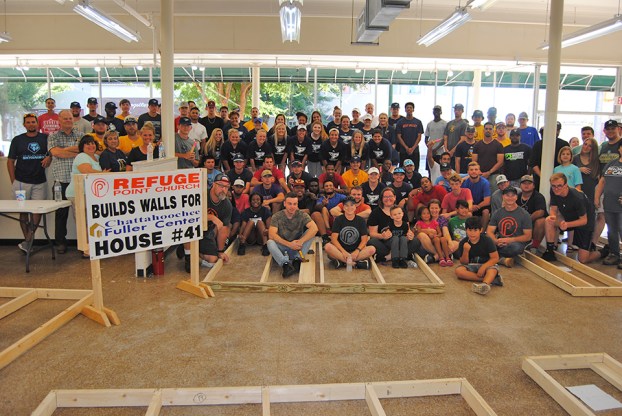 Wayne Clark | Times-News WORKING TOGETHER FOR A GOOD CAUSE: On Saturday, the above volunteers built the walls for CFCP No. 41.

WEST POINT — There was lots of sawing and hammering going on early Saturday morning at the former CraftMaster Furniture building in downtown West Point. Thanks to a good turnout on the part of volunteers, what could have easily been an all-day job was completed by 9:30 a.m.

Taking part were Point University students, members of the Refuge Point Church, and some young men from New Birth Ministry. Their task was to build the walls for a new Chattahoochee Fuller Center Project home that will soon be going up in Valley and another in West Point.

“You have done something amazing this morning,” West Point Mayor Steve Tramell said. “This is awesome. We now have the walls for two new homes. No. 41 will be going up in Valley and No. 42 in West Point.”

Walls for No. 42 were previously built by volunteers from the Church of the Highlands in Auburn.

CFCP No. 41 and No. 42 will be the third and fourth homes built by the organization in 2018. The first two are on Huguley Road and in the Red Dirt Hill neighborhood, both in Valley. Construction will begin this Thursday on No. 41. It will be the fifth new home to go up on Huguley Road in the last few years, turning what had been a bad thing into a good thing. In place of what had been a trailer park that had gotten a lot of complaints from nearby neighbors are five new homes with residents who have the chance to be homeowners.

Members of the First Baptist Church of Valley will be taking part in the building of No. 41. Doug Dewberry will be the house captain.

A concrete slab will be poured at the West Point site this Friday, and work will start on CFCP No. 42 the following Thursday. Mayor Tramell will be the house captain of that build. He will be helped by volunteers from Knauf, Norbord and Coca-Cola.

Both houses should be completed by the middle of October.

“The first step is to get them dried in,” said CFCP Executive Director Kim Roberts. “It should take us two days to do that. We should have No. 41 dried in this Friday and No. 42 the following Friday. We will get back to work on both houses on Monday, Oct. 8 and should be finished by Friday, Oct. 12.”

Roberts said it’s gratifying to have the community support needed to continue with home building in the local area.

“As long as we have the support, we will keep building homes,” she said.