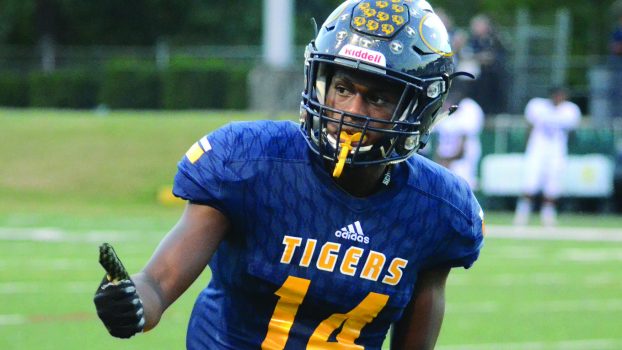 LaGRANGE — It was more Friday-night fireworks for the Troup Tigers.

The unbeaten Tigers (5-0) opened their Region 5-AAAA schedule with a 56-24 victory over the Chapel Hill Panthers before a fired-up homecoming crowd at Callaway Stadium.

Junior Kobe Hudson, who is having a remarkable debut season as Troup’s quarterback, threw six touchdown passes, and he also had a scoring run.

Jamari Thrash had two touchdowns, and Ja’Rell Smith caught one.

Hudson and Tyree Carlisle both had rushing touchdowns.

Troup led 35-0 in the second half before Chapel Hill was able to find some offensive success, but the outcome was never in doubt.

Troup will continue its region schedule with a game at Sandy Creek next Friday.

“It was kind of sloppy, but we did what we had to do,” Troup head coach Tanner Glisson said. “So I’m proud of the kids. I’m proud that we played a lot of people. We scored 56 points, and it was 28-0 at the half. So it was a good win, and nobody got beat up real bad. So we ought to be ready to go next week.”

As has been in the case in every game this season, Troup’s high-powered offense led by Hudson was unstoppable.

With Friday’s outburst, Troup is averaging 45 points per game.

“We have a lot of weapons we can use to score,” said Smith, who averages close to 40 yards a catch.

Troup’s defense did its part as well.

Chapel Hill was held scoreless in the first half when the outcome was still in doubt, with Alonzo Ogletree and Tyree Carlisle both coming up with interceptions.

Jace Godwin had an interception in the second half on a ball tipped by Ogletree.

“(The defensive backs are) starting to develop a good bond together,” Ogletree said. “We’re helping each other play better as a unit. And we’ve got a good pass rush up front. So that makes it more difficult on a quarterback throwing the ball.”

Ogletree’s interception came on Chapel Hill’s opening possession, and Troup took over at its own 45-yard line.

Six plays later, Hudson rifled a pass over the middle to Thrash for a 22-yard touchdown,.

Helsyn Martinez made the first of his six extra points to give Troup a 7-0 lead.

Later in the first quarter, Ogletree made a nice open-field tackle on third down to force a punt, and it took Troup two plays to pad its lead.

On second down, Smith took a screen pass from Hudson, and he turned that into an 82-yard touchdown, and Troup led 14-0 with 11:03 left in the opening half.

Willis went up and caught the pass from Hudson at midfield, and he out-raced Chapel Hill’s defenders for a 76-yard touchdown.

In two plays, Troup scored two touchdowns that covered 158 yards to take a 21-0 lead with 10:08 remaining in the half.

Chapel Hill threatened on its ensuing possession, but Carlisle deflected two passes in the end zone, and Troup eventually got the ball back following a failed fourth-down attempt.

The Tigers ended up punting, but they regained possession on Carlisle’s interception at the 12-yard line.

Troup put together an impressive 88-yard scoring drive that was capped by Hudson’s 1-yard touchdown pass to Willis, and the lead was 28-0 with 1:03 left in the half.

After Troup’s Nick Ligon was named homecoming king at halftime, the offense went back to work on the opening possession of the second half, with Hudson hooking up with Willis on a 55-yard touchdown to make it a 35-0 game.

With Glisson starting to substitute liberally on defense, Chapel Hill started to find some offensive success.

KJ Burton’s 13-yard touchdown run followed by his two-point conversion run cut Troup’s lead to 35-8 with 3:50 to play in the third quarter.

It took the Tigers less than two minutes to answer with a touchdown of their own.

Hudson’s 25-yard completion to Trea Mitchell put the ball near midfield, and a 16-yard quarterback keeper put the ball on the 35-yard line.

On the next play, Hudson hit Thrash in stride down the right sideline for a 35-yard touchdown, and Troup led 42-8.

Burton threw a 30-yard touchdown pass to Miles Richardson, and the quarterback also ran in the two-point attempt to trim Troup’s lead to 42-16 late in the third quarter.

Back came Troup with a touchdown midway through the fourth quarter.

After completing a 42-yard pass to Thrash, Hudson kept the ball for a 14-yard touchdown run, and the lead was 49-16.

Chapel Hill got a rushing touchdown in the game’s waning moments to cap the scoring.

Point University Skyhawks move ahead in season without starting running back

VALLEY — The Skyhawks of Point University celebrated its first win of the football season on Sept. 15 against Kentucky... read more