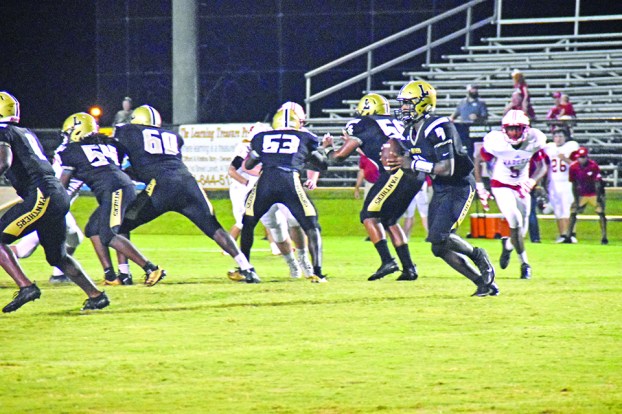 BREAKING FREE: Lanett junior quarterback scrambled for a 44-yard touchdown run in the first half to give Lanett a 13-0 lead in the second quarter. Photo by Rashad Milligan

No. 1 Lanett defeats Wadley in 1A showdown

LANETT — It was a true test of who was atop of Class A region 4 football in the state. The No. 1 Lanett Panthers came out with a 33-15 victory but the win did not come without a challenge.

The Panthers scored the first two touchdowns of the game with a kickoff return from Larontavious Hurston and a breakout scramble from quarterback Kristian Story.

The Bulldogs scored on a pair of touchdown passes in response to Lanett and converted a two-point attempt after the first score with 16 seconds remaining in the first quarter. Wadley carried a 15-13 lead into halftime.

“I knew, going into the game, that they were going to be that kind of caliber football team,” Lanett head football coach Clifford Story, Jr. said. “They’ve got playoff pedigree, they’ve been there the last four, five years with Coach Fordham now it’s Coach Farr. I knew it was going to be this kind of game, we fought through a lot of adversity tonight, but now we’re No. 1 in the region and we’re moving forward.”

The change in the second half for the Panthers was the team’s aggressiveness on the defensive end of the ball.

After rushing for another touchdown on offense, Kristian Story intercepted a pass in the Lanett end zone to prevent a Wadley touchdown in the fourth quarter. Story returned the pick to Lanett’s 22-yard line.

The turnover then led to a 73-yard touchdown pass to Kolby Davidson with 4:50 remaining in the game.

A minute after the score, senior Tifton Dobbs recovered a Wadley fumble for a 38-yard touchdown and the final score of the night for Lanett.

Defensive scores aside, other players, such as senior D’Terrion Glaze also made an impact for the Panthers.

“He did a great job,” Coach Story said of Glaze. “He started setting the edge on the outside, he was dealing with a little hamstring issue but he fought through that and that’s what it’s all about. He was telling us certain defenses he wanted to be in that would help him be able to make plays so we made those adjustments, and gave him an opportunity.”

Glaze was pleased overall with the defensive unit’s performance as well on the night.

“[In the] first half, we made a lot of mistakes, but in the second half, we fix our mistakes and came out with a win,” Glaze said. “We had to get in their gaps, be disciplined and get to the ball.”

The Panthers are now 2-1 on the season and will travel to Autaugaville next Friday. The Eagles are 0-3 going into the matchup.

The worlds of sports and politics have become increasingly intertwined in recent years. Through this new cultural marriage, the opinions... read more