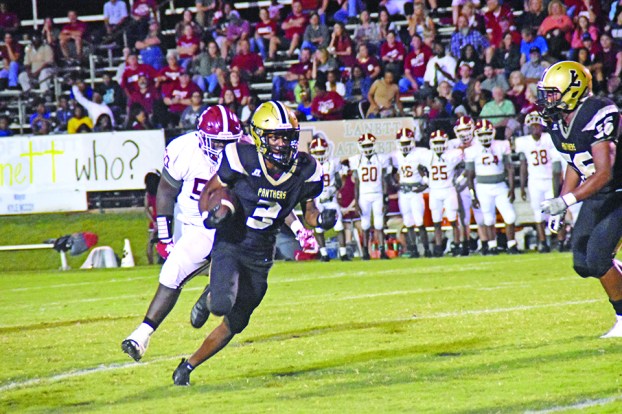 END IN SIGHT: Lanett junior Quae Houston scored the first touchdown of the night for the Panthers with 3:28 remaining in the second quarter. Photo by Rashad Milligan

No. 1 Lanett grinds out victory against tough 4A Handley

LANETT — Friday night looked much different than most wins this season for 1A No. 1 Lanett, who took down Handley 32-20 this week.

It was the Panthers’ opponent, 4A Handley, who scored first with a run to the right for a touchdown with 10:50 to go in the second quarter.

“We faced a lot of adversity tonight,” Coach Story said. “I knew it was going to be that kind of game. Handley’s always had a good football team but we made plays when they needed to be made. We made some third down-and-longs when we needed to make them. I’m proud of these guys, we fought through, we were banged up a little bit, we started getting a little sore and got a few cramps right there but overall total effort, offense, defense, special teams and our coaches, I’m proud of them and the game plan they put in and we were able to come away tonight with a victory.”

The Tigers threatened to score again after a long punt return where Lanett punter Trikweze Bridges made a touchdown-saving tackle. The drive ended in a missed field goal for Handley.

On the next Lanett drive, junior B.J. Smith caught a screen pass and made a bulldozing hit on a Tiger defender. Quarterback Kristian Story then snuck in for a first down. With 3:37 remaining in the second quarter, Kristian Story attempted a deep touchdown throw to junior Quae Houston, which was broken up by a Handley defender. A few seconds later, Houston got the Panthers on the board with a touchdown run.

Lanett scored again before the half with a deep touchdown pass to Bridges on a play where the senior wide receiver just burned his defender with 50 seconds remaining in the half.

An early flag on the Panthers’ defense in the second half brought Handley across midfield. The Tigers capitalized on the field position and ran for another touchdown to tie the game at 14 with 7:53 remaining in the third quarter.

Bridges burned his defender again on the next possession for the Panthers, getting Lanett to the 5-yard line with 6:42 to go in the third quarter. The Panthers scored a couple of plays later as Kristian Story scrambled out of the pocket after faking a handoff to Bridges on a sweep before the primary target found himself open in the end zone for another touchdown grab with 4:33 remaining in the third quarter. Coach Story credited offensive coordinator Chip Seagle on the well-executed play.

Kristian Story then took charge of the game, leading the Panthers down the field with a combination of slant-route completions and scrambles. The standout junior escaped pressure well with field awareness and speed throughout the night. Kristian Story ran in for the next Lanett touchdown with 7:27 to go in the fourth quarter.

After a long quarterback run, Handley scored another touchdown with 5:34 remaining to cut the deficit to six points.

The Panthers responded with a touchdown run by Smith with 1:57 remaining to seal the deal for Lanett.

The Panthers have a much-needed bye week coming up next at the halfway mark, Coach Story said. After the week off, Lanett returns for its homecoming matchup against Loachapoka.

NOTASULGA — Lafayette spoiled Notasulga’s homecoming on Friday night with a 41-20 victory. This ends the Bulldogs two-game skid as... read more