Panthers pull away after early defensive battle with LaFayette 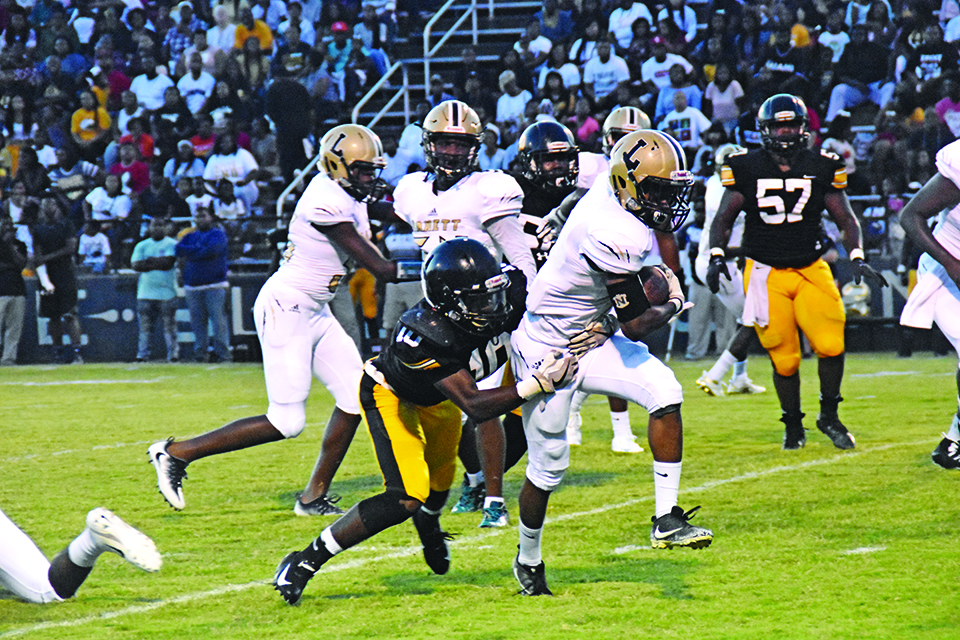 DEFENSIVE BATTLE: There was an approximate eight-minute scoreless period in the second quarter until Lanett junior quarterback Kristian Story broke for a 52-yard touchdown run. Photo by Rashad Milligan

LaFAYETTE — For the second straight season, 1A No. 2 Lanett dominated 2A No. 5 LaFayette. The Panthers won the rivalry matchup, 35-7.

On the opening drive, Lanett marched into the end zone with a touchdown pass to senior wide receiver Trikweze Bridges with 7:40 to go in the first quarter. It marked the second straight week the Panthers opened a game with seven points. Last week, Kristian Story completed a pass to Zion Lynch on the first drive of the game.

“We just scout teams really well,” Lanett head football coach Clifford Story, Jr. said. “Our offensive coaches do a great job and every time we have the ball, we just tell them to be patient and don’t try to overdo it. That’s what we’ve done.”

The rivalry got physical on the field early as Lanett knocked LaFayette quarterback Jae’Lin McCurdy over the fence in one of the first offensive plays for the Bulldogs. LaFayette returned the physicality with some hard runs from Jaquavion “Quabo” Boston-Gaines.

The physicality eventually turned into penalties for both teams as it appeared both teams couldn’t make much progress offensively. McCurdy and Story attempted multiple scrambles that resulted in short, if any gains.

McCurdy then completed a deep pass to Jordan Walker with 10:52 to go in the second quarter. The pass resulted in a touchdown for the Bulldogs.

The starting quarterback and defensive back for LaFayette, McCurdy, intercepted a pass from Story once the Panthers received the ball after the touchdown.

After the interception, McCurdy threw back-to-back slant passes to Me’Kevion Shealey, driving for another Bulldogs score.

The drive, however, ended in a turnover on downs for LaFayette.

Back on offense, Story threw another tipped pass and it appeared as if the LaFayette defense had his number on the night.

There was a turn of fortunes in the game, however, with 2:05 to go in the first half.

That’s when Story broke free for a 52-yard touchdown run to bring the Panthers up 14-7.

“Kristian got a long run there that got us going and the energy changed,” Clifford Story, Jr. said. “That’s what it’s all about. Having our elite players making plays.”

Bridges caught another touchdown pass from Story with 1:09 remaining in the first half to give the Panthers a two-score lead.

In the third quarter, LaFayette’s defense came out hungry again, as Lanett avoided a safety near its own end zone.

The nail in the coffin for the game came with 5:19 to go in the third quarter, as Bridges grabbed his second consecutive pick six.

This interception return went for 60 yards.

“This is the first time since I’ve been here where we actually quit.

We’re going to be alright.”

Lanett scored its final touchdown of the night with a run with 28.5 seconds to go in the quarter.

The Panthers now improve to 1-1 on the season and the Bulldogs fall to 0-1.

Next week, LaFayette travels to Vincent and Lanett will host Wadley.