Point University Skyhawks move ahead in season without starting running back 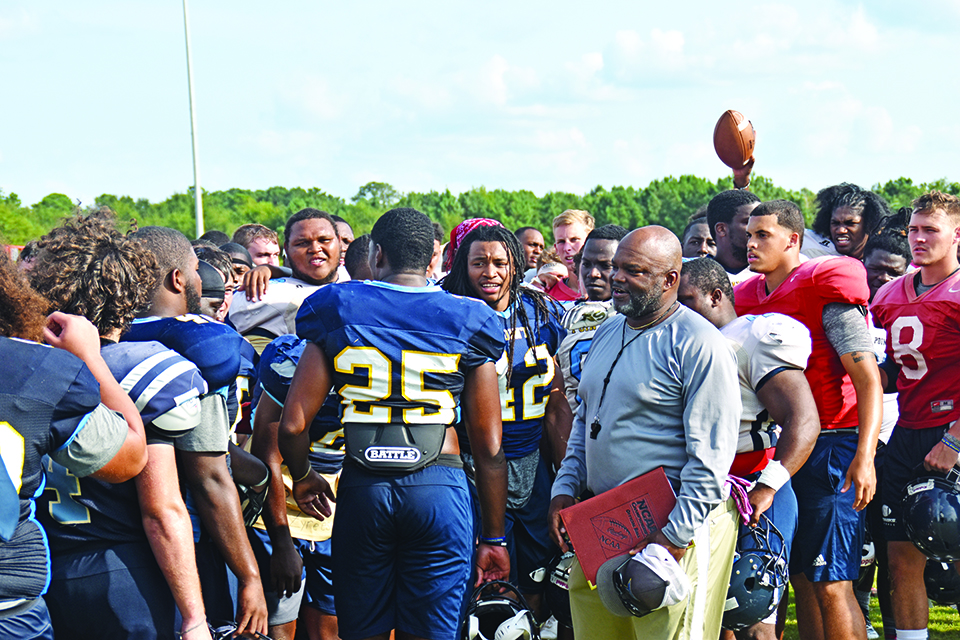 KEEP MOVING FORWARD: Head football coach Julius Dixon and the Point Skyhawks now finish the season without sophomore running back Quay Hartsfield after the student-athlete was invloved in a car accident on Sept. 15. Photo by Rashad Milligan

VALLEY — The Skyhawks of Point University celebrated its first win of the football season on Sept. 15 against Kentucky Christian University. It was the school’s homecoming weekend and sophomore running back Quay Hartfield finished second among all Point rushers with 59 yards in the effort.

Later that night, Hartfield’s life flashed before his eyes.

Riding on the interstate, Hartsfield was hit by a drunk driver, which knocked him into two other vehicles before going into a spin-out. Hartsfield hit a wall and landed back in the middle of the interstate, Point head football coach Julius Dixon said.

Suffering from a broken ankle, pelvis and jaw, Hartsfield climbed out of the car before an 18-wheeler rammed over it, according to Dixon.

“We’re so blessed that we can even speak in the present tense with Quay,” Dixon said. “If you see any pictures of that car, we know that it’s a blessing that he’s still with us.”

The driver who hit the student-athlete’s car fled the scene of the accident, Dixon said.

Hartsfield is now back at home with his family and is prepared to begin intense rehabbing sessions. His family and the university have been in talks to decide on if and how long he’ll be on medical leave.

Hartsfield was the Skyhawks’ starting running back and now the 1-4 team looks to make up for the loss. Point wore Hartsfield’s No. 5 on the team’s jerseys and helmets to honor the teammate in last weekend’s game against Campbellsville University. The Skyhawks ultimately lost the road game, 30-29.

“They’ve responded well,” Dixon said. “They just have to learn how to take advantage of their breaks. We haven’t been getting many of those lately and they’re not giving them away. There are things that they have to take and earn and that’s what we’re hoping to come away from this.”

The effect of Hartsfield’s loss ventures off the field as well.

“He was such a loved player that it affected guys way more than we thought it would,” Dixon said. “They’ve actually grown closer to understand that we can’t take any moment for granted. Here it is a week ago, Quay led the charge in our first victory and now he’s not going to be able to suit up for a while.”

Members of the Greater Valley Area can support Hartsfield in his time of recovery by simply praying for him, his family and the Point University football team moving forward, Dixon said.