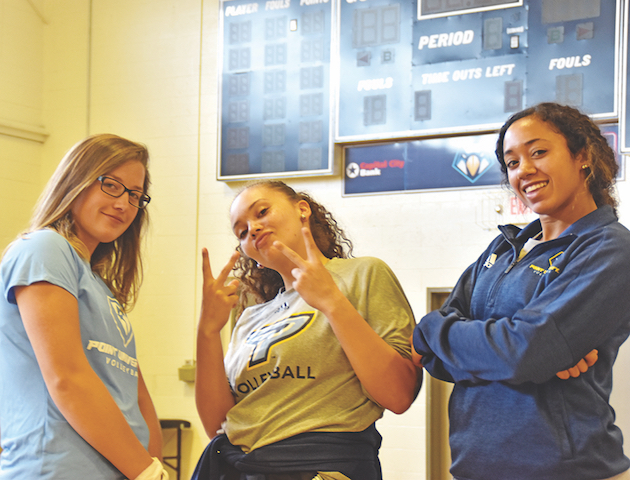 WEST POINT — Senior middle blocker Tatiana Dale and junior libero Tessa Burns have been recognized as this week’s Appalachian Athletic Conference (AAC) attacker and defenders of the week. Dale and Burns join junior setter Julia Felix in the young season’s honors, as Felix was also named the AAC Setter of the Week for Aug. 19-25.

“I think it’s all about the team manner,” Burns said. “Especially the coaches being really involved. She’s [head volleyball coach Amanda Jones] been here for two years, we’ve [Burns and Felix] been here since freshman year. Getting 12th out of 12 our first year in conference play to getting fourth last year to now, having three people getting recognition, you can definitely see how our program’s growing.”

Burns leads the team in digs with 220 on the season. Last week, she contributed 47 digs and committed no errors on 45 service receptions in the Skyhawks’ two matches.

Dale is the current leader in team kills this season with 167 kills and 53 blocks in 60 total sets so far this season. Last week, she tallied 26 kills with two attack errors in 39 attempts to have a .615 attack percentage. She also had three aces, nine digs, six solo blocks and two assisted blocks.

Felix has led the team the last two seasons in assists. The week she was recognized, Felix had 145 assists in 17 sets in Point’s four matches at the Mid-South/AAC Crossover Challenge.

“I think it’s good being a part of the growth and making a new culture for Point volleyball,” Dale said. “It’s really exciting.”

The trio is just three representatives of the tight-knit group that the volleyball program has become at Point. Felix and Burns said the team wasn’t entirely sold on Jones’ vision last season, but the current group who were mostly recruited by her are.

The current group also spends most of its days together at workouts, practices, games and even classes. At a Christ-focused institution like Point, members of the team often get together on a regular basis to have a time of devotion or prayer.

“I think we spend enough time in the gym, at one point, you become close friends,” Felix said. “We’re always in here. Whether that was preseason where I felt like we were living together because we were in here every day. I think it gives you no other choice but to become close and make a family. That’s what we have right now.”

Point was projected to finish third in the conference, according to a preseason poll.