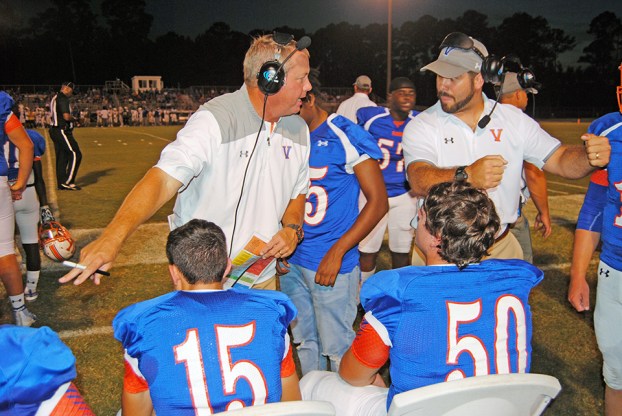 LISTEN UP: Valley head football coach Buster Daniel directs the coaching staff and team on the sideline during Friday’s win over Beauregard. Photo by Wayne Clark

VALLEY — Freshman running back B.J. Baker ran for just under 200 yards and three touchdowns to lead the Valley High Rams to a 41-20 win over the Beauregard Hornets. The win improved Valley’s record to 2-1 on the season and 1-0 in 5A Region 2. Beauregard fell to 0-3, 0-1 in Region play.

“I’ve been coaching high school football for a long time, and I’ve never had anyone like him. He’s a special player,” head coach Buster Daniel said. “Our quarterback, Eli Culpepper had a good game, too.”

Culpepper connected with senior wideout Steven Coker on two TD passes, one of them a 70-yard bomb early in the game to stake the Rams to a 7-0 lead and the other one in the fourth quarter to extend Valley’s lead to 17 points after the visitors had cut it to 31-20.

“I thought out kids played well tonight,” Daniel said. “Beauregard is a good team, and I’m proud of the way we won on offense, defense, turnovers and the kicking game.”

Valley does have a weapon in senior kicker Daniel Etherton, who kicked field goals of 40 and 44 yards.

After the early scoring pass from Culpepper to Coker gave Valley the early lead, another good play by Etherton put Valley in position to build on that lead. After his booming punt rolled dead on the four-yard-line, Valley’s defense came up with a big play, forcing a fumble at the five-yard line. It took the offense just one play to score with Baker exploding through a big hole in the right side of the line racing into the end zone. Etherton’s PAT made the score 14-0 in favor of the Rams with 4:07 left in the first quarter.

The Hornets got their first score of the game on a long pass play. That made it 14-6 early in the second period. Valley responded with a drive keyed by the passing of Culpepper to Bready Power. With 7:55 left before halftime, Baker took a handoff from Culpepper and rounded right end for his second TD of the half. Etherton’s PAT extended the Ram lead to 21-6.

The Hornets responded with a long drive only to have it snuffed out inside the Valley 20 when the defense forced a fumble with senior DB Dominick Whitlow pouncing on it at the Valley 22. The Rams couldn’t move the ball on back-to-back passing plays, and on third and ten, with the Hornets perhaps expecting another pass, Valley fooled them with a draw play up the middle to Baker.

It was the most electrifying play of the evening.

Looking like he was fired out of a cannon, Baker rocketed up the middle, running over people and breaking tackles well past the 30. He then darted toward the sideline, making some great moves to avoid people and then it put it in high gear sailing down the home sideline for a 78-yard TD run.

Beauregard players did manage to bring him down but it was after he crossed the goal line. That brought out a penalty flag, allowing Valley to kick off 15 yards closer to the goal. Etherton’s PAT made the score 28-6 with 4:05 left in the half.

The Hornets managed to get their second TD of the game to make the score a little closer 28-12 just before halftime. They never seriously threatened to take the lead in the second half. Valley sandwiched two Etherton field goals around a Culpepper-to-Coker scoring pass to run their point total for the evening to 41. Beauregard managed one lone touchdown to make the final 41-20.

The win was a sweet one for Valley. First of all, it was a nice way to bounce back from a disappointing loss last week to Smiths Station. Secondly, it was good to start the Region schedule off on a good note versus a team that had dominated them in 2016 and 2017. The Rams could use some momentum from the game as they head into a difficult road stretch. Over the next four weeks, they will be on the road versus Greenville, Carroll of Ozark, Marbury and Tallassee.

LANETT — The direction of a game can change in an instant. The narrative of No. 10 Springwood losing to... read more