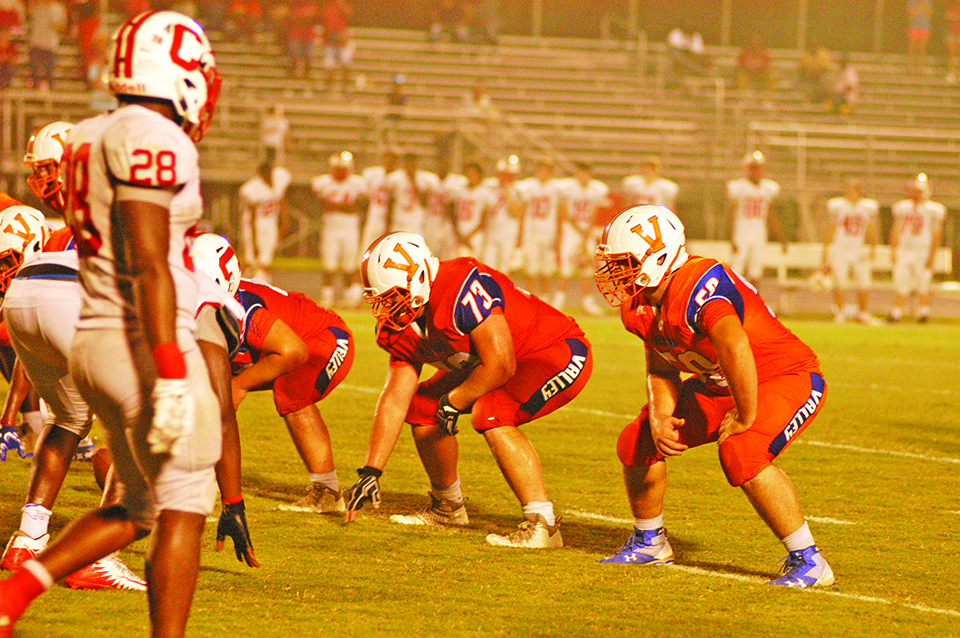 VALLEY — Valley High lost a tough one Friday night at Ram Stadium, falling to the No. 8-rated Carroll of Ozark Eagles by a score of 21-17. Despite being shorthanded – star running back B.J. Baker was suspended for the game – Valley dominated the first half against the highly regarded Eagles. At halftime, they held a 17-7 lead and looked well on their way to winning the game.

The Rams moved the ball up and down the field the whole night and didn’t have to punt one time. Their only turnover came with 40 seconds left in the game when Carroll’s Will Parsons picked off an Eli Culpepper pass in the end zone when Valley had the ball inside the 20 threatening to score.

On the game’s first possession, Valley moved the ball from their own 34 to the Carroll 13 when they decided to opt for a field goal on a fourth-and-two play. Daniel Atherton’s 30-yard kick was right down the middle, giving the Rams a 3-0 lead with 9:45 left in the opening quarter.

The passing of quarterback Eli Culpepper to Will Kennedy paced the drive with D.J. Dunn having some determined runs to keep the chains moving.

On their opening possession, Carroll did something very unusual for this game – they were held to a three-and-out and had to punt. It would be the only time either team had to do that in the first half.

Valley put the ball in play on their 29 and marched it down the field 71 yards and a score.

The running of Dunn and Hutchinson accounted for most of the yardage. The big play of the drive was a pass from Culpepper to tight end Art Hamby, giving Valley a first-and-goal on the three. Two plays later, Dunn blasted through the left side of the line for the game’s first touchdown. Etherton’s extra point made it 10-0 in favor of Valley at the 10:49 mark of the second period.

At that point, things looked really, really good for Valley.

Carroll answered back on their second possession of the game driving the ball 65 yards for a score. They did it mostly on runs off the right side of the line with running backs Tori Mulkey and Jonathan Fells getting most of the yardage. The Ram defense gave ground grudgingly, and they looked to have had them stopped when they had them in a fourth-and-four situation on Valley’s 33.

Fells, though, had different ideas.

Shedding tacklers, he powered off the right side and burst into the clear, running 33 yards for the first Eagle score of the game.

One wonders how the game would have turned out if Valley had stopped them on that play. But to their credit, Carroll had cut it to 10-7 with 6:14 left in the half.

The game was turning into a contest of long, time-consuming possessions.

Now it was Valley’s turn, and the Rams ate up most of the second quarter on their second TD drive of the game. This time they took it 70 yards. On the drive, Culpepper scrambled for one first down and passed to Hamby for another. On fourth and one from the 35, he kept the drive alive by sneaking for a first and ten behind Valley’s big offensive line.

Now it was time for senior wide receiver Steven Coker to make some big plays. He made a beautiful catch on a pass down the middle by Culpepper. That made it first and goal on the eight.

On the next play, Coker took a handoff from Dunn, who was in at quarterback and raced around left end for Valley’s second TD of the game. Etherton’s second point-after made it 17-7 with 1:03 left in the half.

The way the Rams had been moving the football in the first half, it certainly didn’t look like that would be the final Valley score of the game.

The second half got off to a promising start for Valley. The Rams held Carroll to a three-and-out, forcing them into what would be their only punt of the second half. Valley drove the ball across midfield to the Eagle 44 before turning it over on an interception.

Carroll took over on their 13 and went to work running Mulkey and Fells off the right side of the line. They ate up most of the third quarter, keeping the drive alive several times on third down conversions. Fells scored from one yard out with 1:24 left in the quarter to draw them within three, 17-14.

Valley’s offense was stymied on their next possession, largely due to an illegal procedure on second and six.

That made it second-and-11, a hole they couldn’t get out of.

On third and 12, Culpepper did a good job of scrambling upfield for some positive yardage but came up short of the first down. On fourth and seven, Valley had their only punt of the game.

Carroll put the ball in play on their 24 with 10:55 left in the game. Their relentless ground attack chewed up most of the fourth quarter. When Fells scored on a 20-yard run down the left sideline, there was only 4:03 left in the game.

Culpepper led a valiant drive on Valley’s last possession. leading the team from their 26 to inside the 20 before the heartbreaking turnover with 40 seconds left.

It looked like Valley was not going to be denied when Culpepper hooked up with Coker on a big-time pass completion on a fourth-and-seven play at the 44. That advanced it to the 34 and a first down.

Dunn had a couple of big-time runs to get it inside the 20, setting the stage for the decisive interception.

It was a tough break for Valley.

It was the kind of pass that could have easily been caught for a touchdown, but on this night a Carroll defender was the one in the right place at the right time.

The outcome leaves the Rams with a 2-3 record at mid-season and 1-2 in 5A Region.  Valley will be at Marbury next week with a chance to even their record at 3-3.

No doubt the return of freshman sensation B.J. Baker will likely make a difference. Then there are three straight Region games versus Tallassee, Rehobeth and Charles Henderson before closing out the regular season with Benjamin Russell.