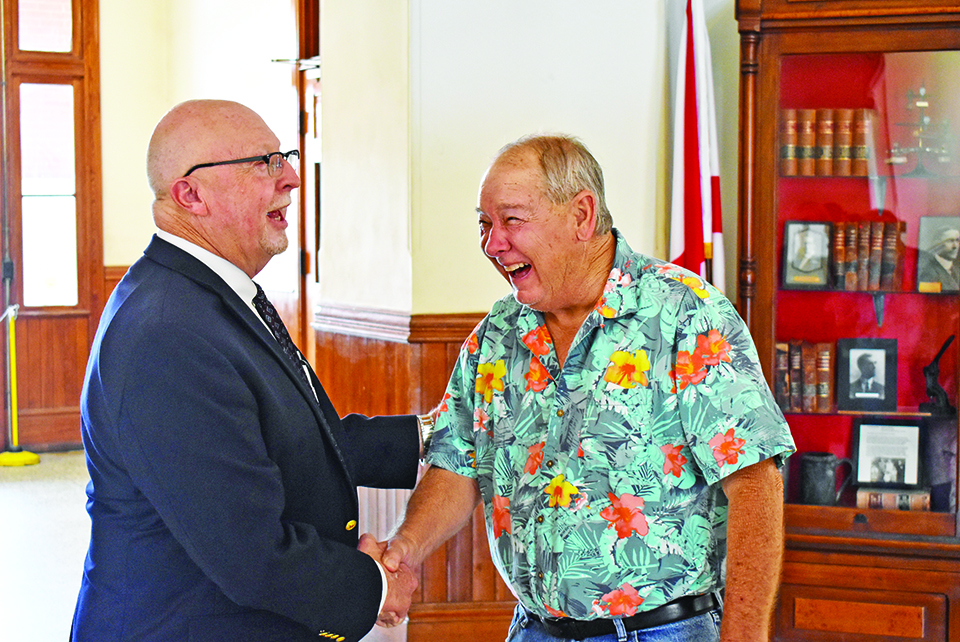 The county courthouse was his fourth stop on the day tour of the district, Price and his wife Oline stopping by Cleburne, Clay and Randolph County beforehand and heading to Lee County afterward. While in Chambers, Price visited with several county employees, thanking them for their support and asking for it once more in November.

Price took Chambers County by a landslide in the runoff, garnering more than double the votes of his opponent Mike Sparks. He believes that his background in agriculture gave him the edge with area voters.

“The northern part of Chambers County is very rural, very agricultural,” he said. “I think that’s another big thing that we bring to the table is that we understand the agricultural part of it. We can relate and we understand what those men and women are going through in agriculture, whether it be timber, crops, whatever it may be.”

Price’s agricultural acumen comes from his years of working on his family’s farm in Lee County and serving on Congressman Mike Rogers’ Agricultural Advisory Committee as well as the Lee County Farmers Federation Board of Directors, according to his campaign.

Price is also a small business owner, something he said the people of Chambers County also appreciate.

“I think that coming from the private sector makes a big difference,” he said. “That is what I heard over and over again [after the runoff]. I know how to create jobs and I look forward to bringing those job opportunities over to Chambers County.”

According to Price, he has spoken to the leaders of the area and will make it a point, if he is elected, to use his state-level influence to provide for their needs.

“I think the biggest thing will be work within the community,” he said. “Making sure that [we] are listening to the leadership and what their concerns are and then making sure that, from the state level, the necessary tools they need are in place and ready for them when they need them.”