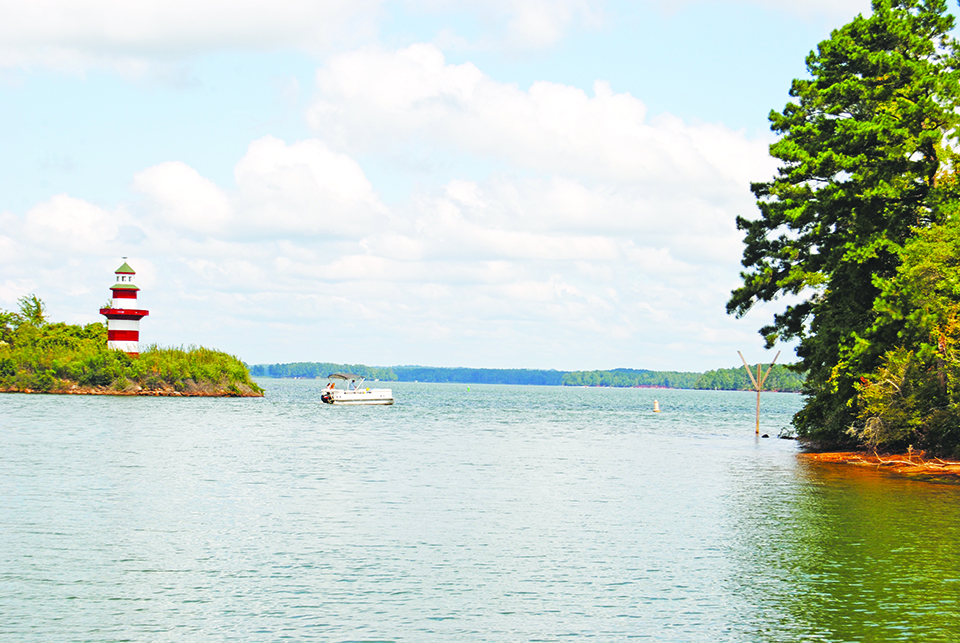 WEST POINT LAKE — Labor Day weekend is the end of the summer season on West Point Lake. That’s true for the West Point Project parks and campground areas. It’s also the end of the busy season for Southern Harbor Resort and Marina, located on the Alabama side of the lake. Southern Harbor owner/manager Robbie Nichols said that the resort had a really good year in 2018 and though it’s now entering a slow period things should remain pretty active.

“Our normal season ended on Monday,” he said, “and things will start picking up again in April. A fishing tournament will be taking place here on Saturday, Sept. 22. A total of 75 boats have registered so far. We’ll have hunters and fishermen staying in our cottages.”

Southern Harbor has 13 one, two or three-bedroom cottages on a finger-like peninsula that straddles the Alabama-Georgia line on the east side of the harbor.

On the opposite side of the harbor is the breakwater dike that was built prior to the impoundment of the lake in the mid-1970s. On its tip is the well-known Southern Harbor lighthouse. Its image graces the front cover of this year’s local telephone book.

Nichols said he decided to build the 35-foot-tall structure when he first got to Southern Harbor in the early 2000s.

“I got lost on the lake one night and couldn’t find my way back,” he recalled with a laugh.

As with most lighthouses, the one at Southern Harbor is lighted at night, noting its location to anyone who’s out on the lake at night.

The Fractured Flamingo is a popular restaurant to fishermen and boaters in the summer months and to the general public on a year-round basis.

The restaurant is open on Wednesdays, Thursdays and Fridays from 5 p.m. till 10 p.m. EDT and from noon till 10 on Saturdays. In the summer season, it’s open from noon till 6 p.m. on Sundays.

The floating store has all kinds of items for the fisherman or the nature lover. One of the popular items is a car tag that reads. “Southern Harbor, West Point Lake, the Hooch Republic.”

Admittedly, the name is borrowed from the popular nickname Conch Republic in the Florida Keys, but it doesn’t just relate to the West Point Lake portion of the river; Hooch Republic can relate to the entire river.

The dock outside the floating store is a frequent home for ducks. They stay there year round and have been spoiled by the way visitors and staff feed them. When the fish pellets are tossed into the water, the ducks jump off the dock after them and they’re not the only ones in this feeding frenzy. Large painted turtles, catfish and carp rise to near the surface to catch those tasty morsels as they sink.

“The kids really love to do that,” says Nichols. “We also have the students from Valley Haven coming here to feed them. We enjoy having them visit us.”

Some of the dock feeders have been there for years.

“I guess they’ve learned they won’t get shot at when they are here,” Nichols said. “One of our ducks has a hole in his foot. We’ve nicknamed him AFLAC, and he’s been here 10 or 12 years. One of the turtles that comes up to feed only has three legs.”

Southern Harbor’s dock area has approximately 170 slips. It’s mostly filled during the warm weather season. In addition to the local area, people come here from communities south of Atlanta such as Newnan, Peachtree City and Griffin, along with Middle Georgia communities such as Thomaston, Warner Robins and Perry plus area’s south of here such as Columbus/Phenix City and Opelika-Auburn.

Also on the property is the historic Cook House. It’s not open to the public right now but has an interesting history. It was the home of Batson-Cook co-founder Edmund Cook. The house was designed by the same architect who designed the Little White House in Warm Springs.

“We will be slowing down some with the kids in school and football season underway,” Nichols said. “But we’ll have hunters and fishermen coming in to stay in the cottages. The Fractured Flamingo is still open, and we’ll have some fishing tournaments here. Anyone who loves the outdoors will love it here. I know I do.”