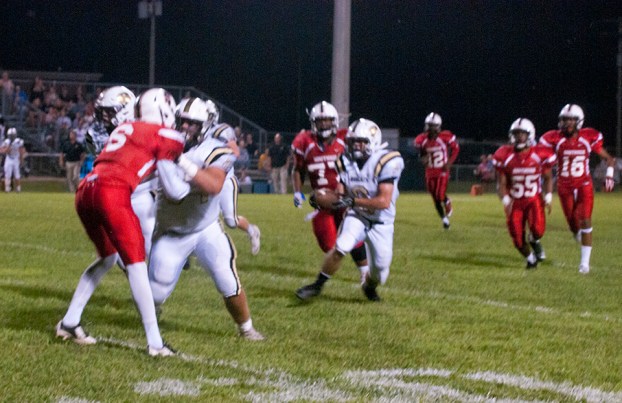 Chris Person Jr. rushed for 252 yards on 46 carries in the 42-34 win over Southside on Friday night.

SELMA — Southside was in position to grab its first win of the season.

Running back Chris Person Jr. rushed for 252 yards as Beulah took a wild 42-34 victory on Friday night at Panther Stadium.

“We came so close, we were right there,” Southside coach Daniel Flowers said. “I asked my kids this week to play with heart and they did tonight. That’s why they’re hurting right now. They gave it their all.”

Williams had over 230 all-purpose yards and two touchdowns. He scored on a 70-yard kickoff return in the first quarter, which Beulah led 21-14. Griffin had four receptions for 127 yards, two touchdowns and a two-point conversion catch.

In the end, Beulah’s running game was the difference. The Bobcats had almost 400 yards rushing. Person was the workhorse, carrying 46 times.

“It was all a team effort,” Person said. “The offensive line did a great job blocking. With injuries, I had to step up.”

“We call Chris Person the silent assassin,” Bobcats coach Cody Flournoy said. “He doesn’t talk a whole lot. We were able to run the football.”

The Panthers scored the only third-quarter touchdown on Griffin’s 15-yard touchdown reception, getting within 28-20.

The Panthers scored two straight touchdowns in a five-minute stretch to get within 35-34 with 5:48 left. Johnson’s 50-yard touchdown run, his 80-yard touchdown pass to Williams and a two-point conversion brought Southside within a point.

Southside forced a Beulah turnover inside the red zone and had a chance to pull off the upset with 3:39 left. But Williams fumbled and Grant Webb recovered at the Panthers’ 5-yard-line.

On the Panthers’ next possession, defensive Ty Williams’ interception sealed the win for Beulah.

“One play did not lose us the game,” Flowers said. “Beulah was the better team tonight. We have to keep fighting.”

NOTASULGA — Lanett breezed their way to victory against Notasulga on the road in a 42-0 one-sided demolition derby. The... read more