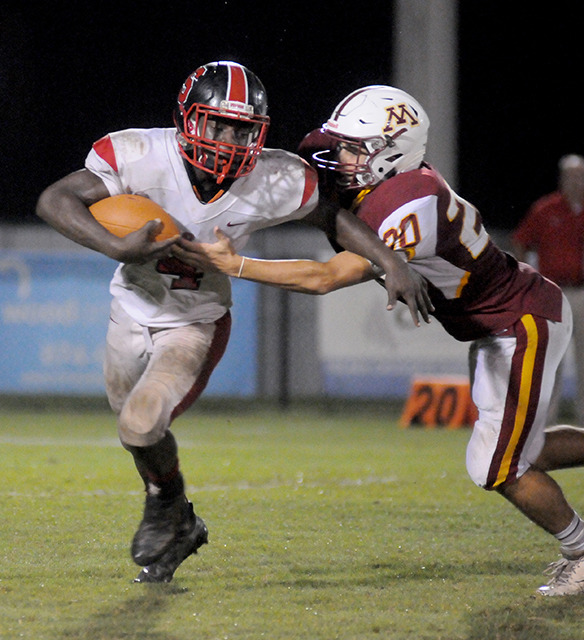 The No. 8 Morgan Senators (6-1) extended their winning streak to six-games Friday night at home with a 62-12 victory over the Springwood Wildcats (2-4).

“In the locker room, we get pretty loud after big wins like this,” Morgan Academy quarterback Jeremy Lee said.

The Senators struck early-and-often in the lopsided victory.

Lee threw his first of five touchdown passes on the third play of the game on a 53-yard wide receiver screen play to Ed Williams.

The Senators played without their leading rusher Holt Utsey, who was sidelined due to a hip pointer injury, so the team went to the aerial assault.

“Jeremy’s a great quarterback who does everything we ask him to do.” Thacker said. “We have a skill set at receiver that I think is hard to matchup to sometimes. Ed, Hardin Mason and Dione present different problems.”

Lee finished the game completing 8-of-11 passes for 218 yards to three different receivers.

“My line was blocking and giving me plenty of time,” Lee said. “My receivers were making moves on the outside to get open. They just do it well every game.”

A muffed kickoff return by the Wildcats gave the Senators the ball right back just outside of the red zone. Running back Will Ingram capped off a four-play drive with a 2-yard touchdown run to stretch the lead to 28-0 before the end of the first quarter.

The Wildcats second quarter got off to a bad start as well. On fourth down, Springwood’s punt was blocked and then returned 35 yards for a touchdown by Morgan Academy’s Dione Allen.

The Senators defense contained the Wildcats offense all night long.

“They’re a Shaun Bonds led defense, so they’re going to be great at everything they do,” Thacker said.

The Wildcats’ first two first downs were the result of a defensive pass interference call and a roughing the punter call in the second quarter.

Springwood’s quarterback Jordan Plank earned the first offensive first down on a broken pass play where he scrambled to his left and fired the ball to receiver Kannon Key 32-yards down field along the Wildcats sideline.

Ultimately, that drive ended with Springwoods punter being tackled for a loss after fielding a bad snap.

The Senators only needed three plays on the following series before Lee connected with Hardin Utsey for his fourth touchdown of the half.

Trailing 42-0, the Wildcats didn’t give up on the first half of football. Plank surprised the Senators defense with a 57-yard touchdown run with 10 seconds before the break to get the Wildcats on the scoreboard. The PAT was no good, and the Senators led 42-6 at halftime.

The second half was much of the same as the Senators had the game in hand. Lee and Hardin connected for his fifth touchdown of the game early in the third quarter, and then Morgan switched to the run game.

Senators running back Matthew Free carried the load for the remainder of the game and finished the game with 98-yards on 15 carries and two touchdowns.

The Senators allowed the Wildcats one more trip into the end zone early in the fourth quarter when O.J. Tolbert ran in a toss from the 1-yard line with 10:48 left in the game.

Morgan Academy continues to improve on its best season since its 2005 championship season, where the team went 12-1.

The Senators have scored more than 60 points in its last two games, and is averaging 39 points per game this season. Each week, the team is finding multiple ways to get into the end zone.

“Coach Thacker is an offensive specialist, and he knows everything inside-and-out,” Lee said. “He taught it all to us, so we just run out there and put it all together on the field.”

The team faces No. 9 Bessemer Academy on the road next Thursday, Oct. 4 for a region game.