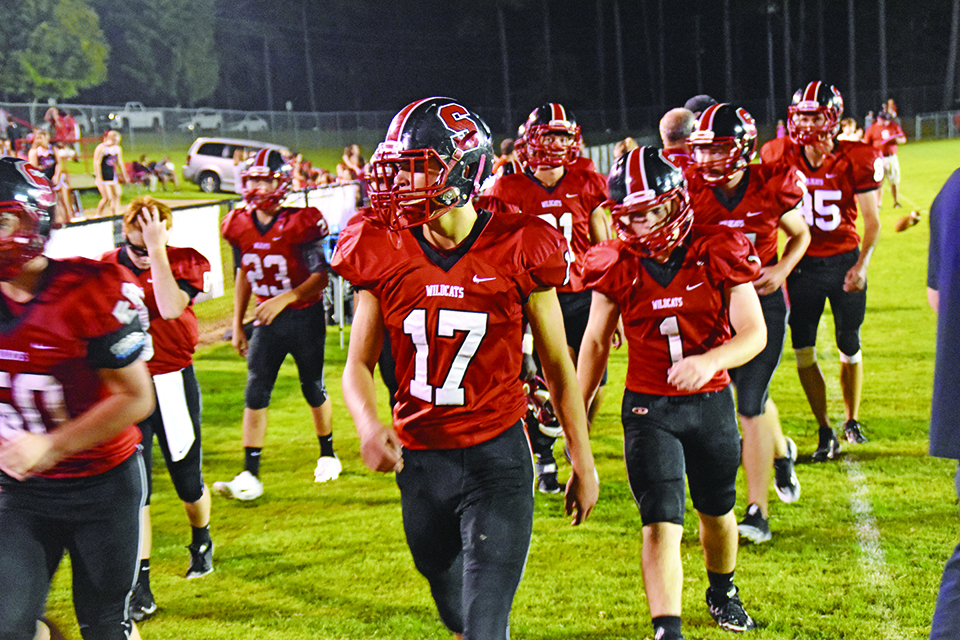 SETTING THE STANDARD: On the week Chalyb Lenker, No. 17, and the varsity Springwood Wildcats were ranked 10th in the state, the junior varsity defeated Glenwood on Tuesday night. Photo by Rashad Milligan

“We improved 100 percent from what we did last week,” Springwood junior varsity head football coach Mike Holcombe said. “The boys have gone out and they have worked hard. We blocked much better, we were more physical than before.”

Ethan Plank led the Wildcats in the win with 182 rushing yards, 4.5 tackles and a sack on the night. Plank is the younger brother of varsity starting quarterback, Jordan.

“He has been a tremendous impact,” Holcombe said of Plank. “He’s the workhorse of the group. A lot of it is him on his own, just his desire to be the very best that he can be is really what’s driving him.”

In the second quarter, Caleb Jones returned a punt 70 yards for a touchdown.

“That was a sigh of relief,” Holcombe said. “We had some decent blocking and he just made a heads up play. He made the right cut, broke two tackles and took it all the way.”

Quarterback Cooper Champion had a well-balanced night by running for 37 yards and a touchdown while throwing for 55 yards and another touchdown through the air.

“He gets out there, takes charge, he directs and tells people where to go and what to do, he is a good leader out there,” Holcombe said. “He’s got the patience to be a top-notch quarterback. His general knowledge of the game, his work ethic and his hunger to be successful. I think those are the things that really make him.”

On the varsity level, the Wildcats entered the Alabama Sports Writers Association (ASWA) state rankings earlier this week. The group is off to a 2-0 start behind new head football coach John Gartman, who was awarded the job a month before the team’s season-opener against Success Unlimited. Gartman implemented the Wing-T offense in the program, which goes down to the junior varsity team as well.

The junior varsity has caught on to the new offensive system just as fast, if not faster than the varsity has, according to Holcombe.