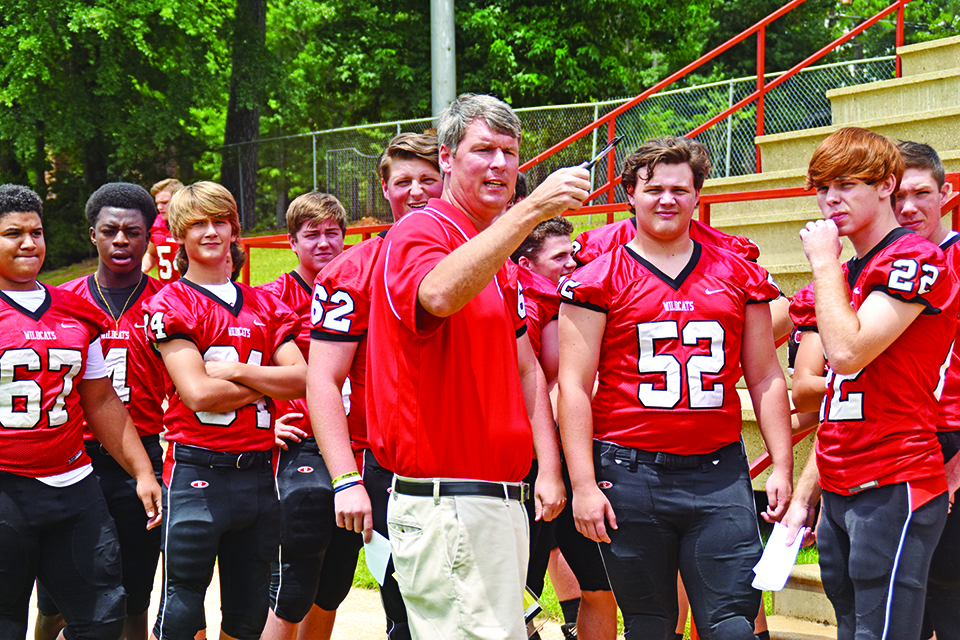 QUICK GUIDANCE: John Gartman became the new head football coach at Springwood School on July 19, which is just over a month of the team’s first game on Aug. 24. Photo by Rashad Milligan

The loss marks the second consecutive for Springwood after being ranked No. 10 in the ASWA poll in week two. Springwood lost to Edgewood 44-13 after Edgewood went on a huge scoring run before halftime.

In the local rivalry against the Rebels, the Wildcats have dropped three consecutive matchups against Chambers. The Rebels have outscored opponents 235-28 so far this season and have won 29 regular season games in a row.

“I think we’ll play hard,” Gartman said. “Hopefully we can play tough and maybe pull one out there. They’re a very talented team, they’re very well-coached. We have our hands full with them but we’re going to work hard this week, try to get focused and see what we can do to them Friday night.”

The rivalry perhaps intensified this season with Gartman coming over to Springwood and implementing the Wing-T offense, the same offense that Chambers Academy head football coach Jason Allen prides himself on running.

This year, quarterback Payton Allen has a backfield on Jordan Gillespie, C.J. Lyons and Hayden Harris in the lethal-running attack. Dylan Anderson and O.J. Tolbert were huge components in Springwood’s 2-0 start this season to help the Wildcats.

On the coaching level, however, Springwood doesn’t plan to change anything in preparation for the big game.

“We preach the same things every week,” Gartman said. “We like to stay on even-kill emotionally, not making any stupid errors. Sometimes in rivalry games, you can get a little overboard emotionally, start making mistakes and we don’t want to do that. Whether it’s a rivalry game or not, we always preach ‘playing smart football.’ Hopefully, we’ll be able to do that Friday.”

The game is at Chambers Academy and begins at 7 p.m. CDT.