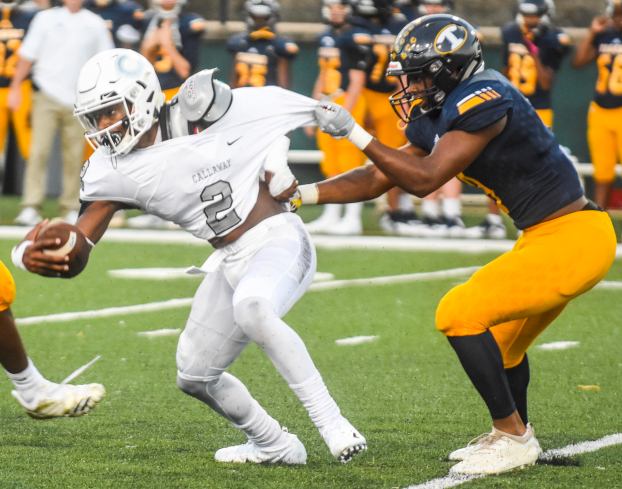 LAGRANGE — With his future college coach looking on, Troup’s Kobe Hudson put on a show.

The junior quarterback threw four touchdown passes, two apiece to Jamari Thrash and Mark-Anthony Dixon, and he also had a scoring run to lead his team to a 37-20 victory over the Callaway Cavaliers before a standing-room-only crowd at Callaway Stadium on Friday night.

Hudson performed at a high level with Auburn head coach Gus Malzahn keeping an eye on things from the sideline.

Hudson, one of the state’s most heavily recruited players, has verbally committed to Auburn, and Malzahn had to like what he saw.

Showing a strong arm, pinpoint accuracy, and the ability to deliver the ball on the run, Hudson threw touchdown passes of 63 and five yards to Jamari Thrash, and he had scoring passes of seven and 26 yards to Dixon.

Late in the game, Hudson’s 1-yard keeper capped the scoring and put an exclamation mark on an impressive victory over a strong Callaway team that came into the game ranked second in Class AA.

The game was tied 14-14 in the third quarter, but Troup was able to create some separation and win going away.

It was the first time Troup had been pushed in the second half, and Hudson was glad to have some suspense.

“I was looking forward to a four-quarter game to see how my team was going to react with the pressure, and we handled it really well,” Hudson said.

It was a tough loss for Callaway, and head coach Pete Wiggins said the goal now is to improve and be ready to roll when Region 5-AA play begins next week against Temple.

The Cavaliers did a nice job of overcoming a 14-0 first-half deficit in the first half to make a game of it before falling short.

Callaway got a 35-yard touchdown pass from Jacob Freeman to Nathan Sapp late in the first half on a deflected ball.

“We’ve got to learn from our mistakes,” Wiggins said. “I told the kids after the game, we’ve learned a lot from losses in the past, and that’s what we have to do. We have to keep moving on and get ready for the region.”

Troup has the same mindset.

As impressive as Friday’s win was, Troup will, in essence, be starting over next week when it plays Chapel Hill in the Region 5-AAAA opener.

“That was a good football team,” Glisson said. “I’m proud of our guys. But we said all week long this is about bragging rights. Now, our non-region’s over, we’re 3-0, and now it’s time to get ready for a really good Chapel Hill team.”

Troup, showing off its explosiveness, scored on the first play from scrimmage, with Hudson hooking up with Thrash for a 63-yard touchdown, and Helsyn Martinez made the first of his five extra points.

Thrash hooked up with Thrash for a 5-yard touchdown early in the second quarter, and Troup led 14-0.

In the second half, after Callaway tied it at 14-14, it was Dixon’s turn to find the end zone.

Dixon had a 7-yard touchdown catch in the third quarter and a 26-yard scoring reception in the fourth quarter on a perfectly-thrown ball by Hudson.

A number of other Troup players, including receivers Joko Willis, Ja’Rell Smith, and running backs Tyree Carlisle and Trey Williams also got involved in the offense.

“It’s like a video game,” Hudson said of having so many playmakers around him. “It’s really fun. For me, I don’t focus on myself. I like to get my teammates the ball. That makes them better.”

One of those play-makers is Thrash, who has five touchdown catches in three games, and 23 scoring receptions in his past 16 games.

It didn’t take Thrash long to make an impact.

After the opening kickoff, Thrash got behind the defense, and Hudson hit him in stride on the sideline for the 63-yard touchdown.

When the Tigers got the ball back, they showed their ability to put together a sustained drive, going 84 yards in 16 plays for the score.

Callaway thought it had stopped Troup when Jalin Shephard picked off a pass in the end zone, but pass interference was called on the play.

Two plays later, Hudson’s 5-yard scoring pass to Thrash and the extra point made it a 14-0 game.

The Cavaliers took some momentum into the break with their touchdown late in the second quarter.

Callaway was on the 36-yard line when Freeman threw the ball into the end zone, and the ball bounced off receiver Dre Potts, and right into the hands of Sapp who was in the right spot for the deflection.

The result was a 36-yard touchdown pass from Freeman to Sapp, and Hunter Williamson made the extra point to cut Troup’s lead to 14-7 with less than a minute left in the half.

On their first possession of the second half, the Cavaliers tied the game, going 60 yards in six plays.

The drive was capped by Hines’ 18-yard touchdown run right up the gut, and Williamson’s extra point deadlocked the score at 14-14 with 9:14 to play in the third quarter.

The game’s next points came on a special-teams miscue by the Cavaliers.

On fourth down deep in Callaway territory, Sapp lined up to punt, and the ball sailed over his head and went into the end zone.

It took the Tigers three plays to pad their lead.

On first down, Hudson hit Smith for a 73-yard completion all the way to the Callaway 9-yard line.

Two plays later, Hudson found Dixon for a 7-yard touchdown pass, and Troup was up 23-14 with 5:02 to play in the third quarter.

After a Callaway punt, Troup’s offense went back to work from its own 18-yard line.

Hudson finished that drive by hitting Dixon in stride for a 26-yard touchdown, and Troup’s lead was 30-14 with 7:50 to play.

The Cavaliers answered with a touchdown of their own, with Bigsby ripping off a 30-yard scoring run.

Troup put it away with a 68-yard touchdown drive that ate up almost all of the remaining time.

Hudson’s 1-yard touchdown run and the Martinez extra point capped the scoring with 1:02 to play.

Callaway got into Troup territory before time ran out.

OF NOTE: For more photos, check out Facebook.com/LDNSports

By ANTHONY RICHARDS Thorsby defeated LaFayette 18-14 in a statement victory to improve to 4-0 overall and 2-0 in Region... read more